The Pacific Islands Ocean Observing System (PacIOOS) believes that ocean data and information can help save lives and resources. Aiming to promote a safe, healthy and productive ocean and resilient coastal zone, PacIOOS collects real-time data on ocean conditions, forecasts future events, and develops user-friendly tools to access this information. In collaboration with a large network of partners, PacIOOS helps inform decision-making in Pacific communities on a daily basis.

The PacIOOS region spans across the U.S. Pacific Islands, including the State of Hawaiʻi (Kauaʻi, Oʻahu, Maui County, Hawaiʻi Island); the territories of Guam, the Commonwealth of the Northern Mariana Islands (CNMI), and American Samoa; the Freely Associated States of the Federated States of Micronesia (FSM), the Republic of the Marshall Islands (RMI), and the Republic of Palau; and the Minor Outlying Islands of Howland, Baker, Johnston, Jarvis, Kingman, Palmyra, Midway, and Wake. 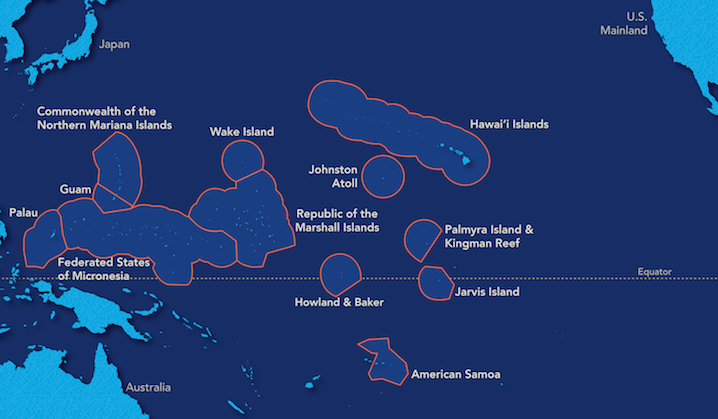 Based within the School of Ocean and Earth Science and Technology (SOEST) at the University of Hawaiʻi at Mānoa (UH), PacIOOS is one of 11 regional associations within the U.S. Integrated Ocean Observing System (IOOS®). PacIOOS staff and regional liaisons are working closely with a wide range of stakeholders throughout the U.S. Pacific Islands to identify and address ocean observing needs.

In August 2015, IOOS certified PacIOOS as its first Regional Information Coordination Entity (RICE). Certification is a key milestone to the establishment of the full IOOS system and is mandated in the ICOOS Act. Certification means that PacIOOS is providing high-quality observations to National-level standards and extending the reach and ability of Federal programs. Learn more about the benefits of certification!

The PacIOOS Governing Council provides strategic and policy guidance to PacIOOS leadership and helps manage the observing system through an Executive Committee. Members of the Governing Council are elected by Memorandum of Agreement (MOA) signatories to serve three-year terms. The Council selects a Chairperson to serve as the presiding officer (currently Brian Taylor, Dean of SOEST).

Commonwealth of the Northern Mariana Islands

Republic of the Marshall Islands

In 2007, the Hawaiʻi Ocean Observing System (HiOOS) was established as a pilot observing system under a cooperative agreement between SOEST and NOAA. Given the substantial investment needed to develop an observing system throughout the entire U.S. Pacific region, HiOOS was designed as a demonstration project that could be jump-started by leveraging substantial SOEST capacity and partner assets and funding. Its development as part of the national IOOS network of regional associations was undertaken with the intent to expand to the other archipelagos in the U.S. Pacific region following the initial demonstration phase of transferring technology, expertise, and best practices.

The development of observational, modeling, data management, and outreach capabilities within a limited geographic area generated the foundation from which PacIOOS continues to grow. Over recent years, observing system assets have been deployed beyond the initial pilot project area and are represented in each PacIOOS jurisdiction.

Please consider acknowledging PacIOOS in any distribution or publication of data as follows:

Data provided by PacIOOS (www.pacioos.org), which is a part of the U.S. Integrated Ocean Observing System (IOOS®), funded in part by National Oceanic and Atmospheric Administration (NOAA) Awards #NA16NOS0120024 and #NA21NOS0120091.