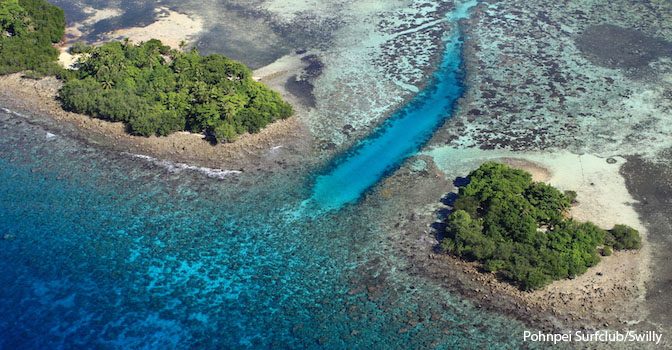 Dr. Rhodes hypothesizes that spawning times coincide with optimal environmental conditions for larval retention and survivorship, such as current strength and direction, and food availability (measured by Chlorophyll A levels). The study will increase our understanding about the “choices” fish make relative to spawning location and reproductive success and how climate change may affect fish population persistence. Information of annual temperature profiles from this study will be compared to other regional data where these species aggregate to spawn to identify potential trends in reproductive life history relative to ambient environmental conditions.

While the primary purpose of the WQSPP project at Kephara Island, FSM, is to study the effects of environmental parameters on spawning aggregations, water temperature measurements collected by the sensor also serve as an invaluable time-series to help reveal triggers for a large-scale coral bleaching event that occurred around Pohnpei last month.

Located at a depth of 40m, sensor data has shown that average monthly temperatures rose 0.5°C above historic averages for the months of July, August, and September 2016. Temperatures peaked at an average of 30.1°C in September. The WQSPP sensor measured warmer waters despite the sensor being in slightly deeper waters than its predecessor.

The PacIOOS sensor was originally intended to be deployed at the current location for one year, but it will now be deployed for another year to document possible El Niño/La Niña effects. The sensor may be redeployed at a second location at Pianu Pass in Chuuk, FSM, near the end of 2017.

Find out more about the WQSPP!