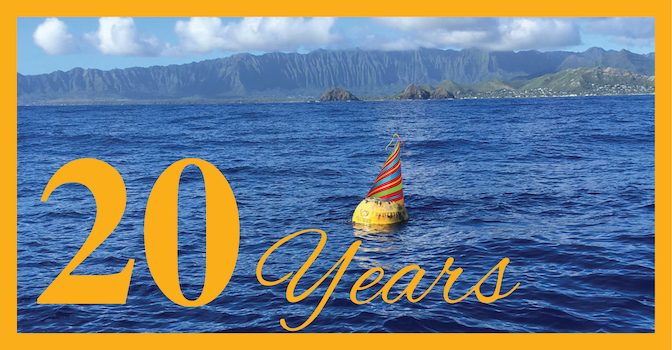 The PacIOOS wave buoy off Mōkapu on the windward side of Oʻahu celebrates its 20th anniversary! On August 9, 2000, the School of Ocean and Earth Science and Technology (SOEST) deployed the Mōkapu wave buoy as its first wave buoy in Hawaiian waters. Two decades later, this wave buoy site is still going strong and recording wave conditions every 30 minutes. Over the years, nine other wave buoys were added to the network in the Hawaiian Islands, and an additional five in the insular Pacific. All data for the Mōkapu wave buoy (and all other sites) can be accessed through the PacIOOS website or the Coastal Data Information Program (CDIP).