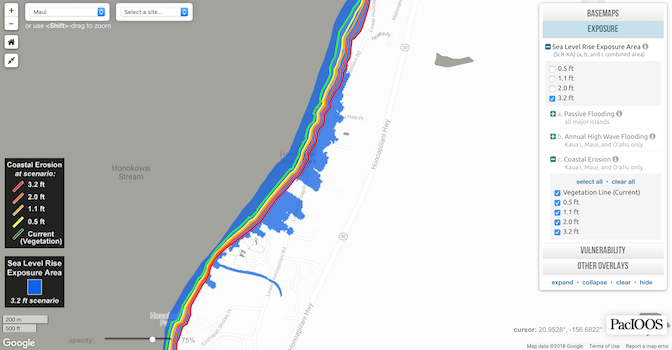 PacIOOS developed the Hawaiʻi Sea Level Rise Viewer as a companion to support the State of Hawaiʻi Sea Level Rise Vulnerability and Adaptation Report. The viewer provides easy access to coastal hazard exposure areas and vulnerability layers. Homeowners, planners, and other users can explore flooding and coastal erosion for a variety of sea level rise scenarios. Potential economic loss and flooded highways are also displayed in the viewer.

The Hawaiʻi Climate Change Mitigation and Adaptation Committee recently accepted the report, which is intended to serve as a guiding document to identify areas around the state that are vulnerable to sea level rise. The report also addresses strategies to adapt to the physical, social, and economic impacts of sea level rise.

“We collectively must face some very tough and very expensive decisions, particularly about whether we move or fortify coastal infrastructure like roads and highways, homes, hotels, condos and businesses; do we move entire communities?” asked Sam Lemmo, the administrator of the DLNR Office of Conservation and Coastal Lands (OCCL).

The report was written by Tetra Tech, Inc. and the Hawaiʻi Office of Conservation and Coastal Lands, with support from Hawaiʻi Sea Grant and the University of Hawaiʻi Coastal Geology Group. The viewer was developed by PacIOOS, under the direction of Hawaiʻi Sea Grant, and with input from report authors and contributors. Funding was provided by NOAA’s 2016 Regional Coastal Resilience Grants Program.