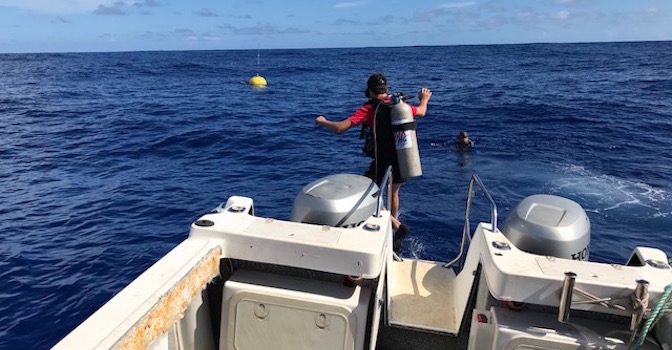 The PacIOOS wave buoy off Aunu’u in American Samoa has been recording sporadic but distinct sea surface temperature spikes. To further investigate the origin, local authorities, including the American Samoa Power Authority and American Samoa Renewable Energy Committee, as well as Hawaiʻi Sea Grant worked with a student from Pacific Horizons High School and Crux Diving to attach small sensors along the wave buoy mooring line to collect temperature data at different depths. The most drastic anomaly to date occurred right after the deployment of the sensors, which will provide valuable data. Researchers suspect hydrothermal fluid may be venting from the fracture zone at the seafloor. If geothermal venting is confirmed, further studies are planned to determine whether this is a potential source of geothermal energy for American Samoa.