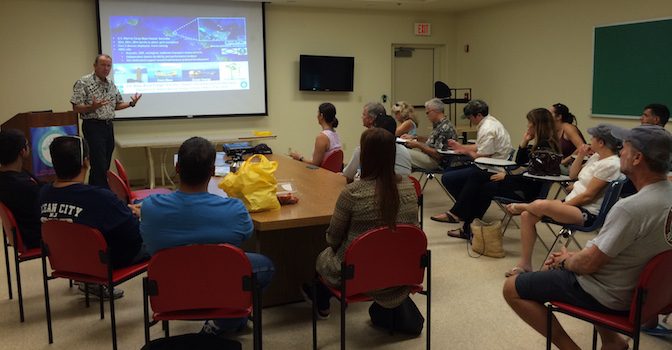 PacIOOS welcomes all newly elected Governing Council members! Eli Cabrera from the Bureau of Environmental and Coastal Quality in Saipan will serve as the representative for the Commonwealth of the Northern Mariana Islands, and Scott Burch with the National Park of American Samoa is our new member to represent American Samoa. Jennifer Conklin, U.S. Coast Guard District 14, fills a Hawaiʻi seat and Captain Mike Roth, U.S. Navy, United States Pacific Fleet, is occupying a regional seat. We are also excited that Willy Kostka, Micronesia Conservation Trust, and Jason Biggs, Government of Guam, will continue to represent the Federated States of Micronesia and Guam, respectively. New members will join the diverse council with representation from across the Pacific Islands region for a three-year term.

Elected by other Memorandum of Agreement (MOA) signatories, the incoming members will serve for three-year terms. The Governing Council is comprised of five regional members, six Hawaiʻi members, and one member each from Guam, the Commonwealth of the Northern Mariana Islands, American Samoa, Republic of the Marshall Islands, Federated States of Micronesia, and Republic of Palau, as well as one ex-officio member from the fiscal sponsor organization.