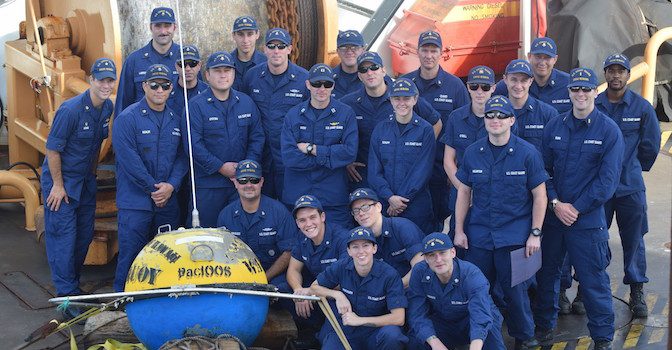 The U.S. Coast Guard recovered a drifting PacIOOS wave buoy 800 nautical miles (NM) offshore from its original location off Tanapag, Saipan, in December 2018. The buoy broke free from its mooring in 20 to 25-foot seas when Super Typhoon Yutu directly hit the Mariana Islands on October 25. Rough storm and ocean conditions did not favor a speedy recovery, allowing the buoy to drift west in the Philippine Sea.

For safety reasons and as a close partner, the U.S. Coast Guard was immediately notified by PacIOOS after the wave buoy departed. At the time, the U.S. Coast Guard was not able to assist with the retrieval of the drifting asset since all available units were focusing on comprehensive post-storm assessments and recovery efforts. Fortunately, all PacIOOS wave buoys are equipped with GPS, ensuring continuous monitoring and tracking of the buoy’s position. 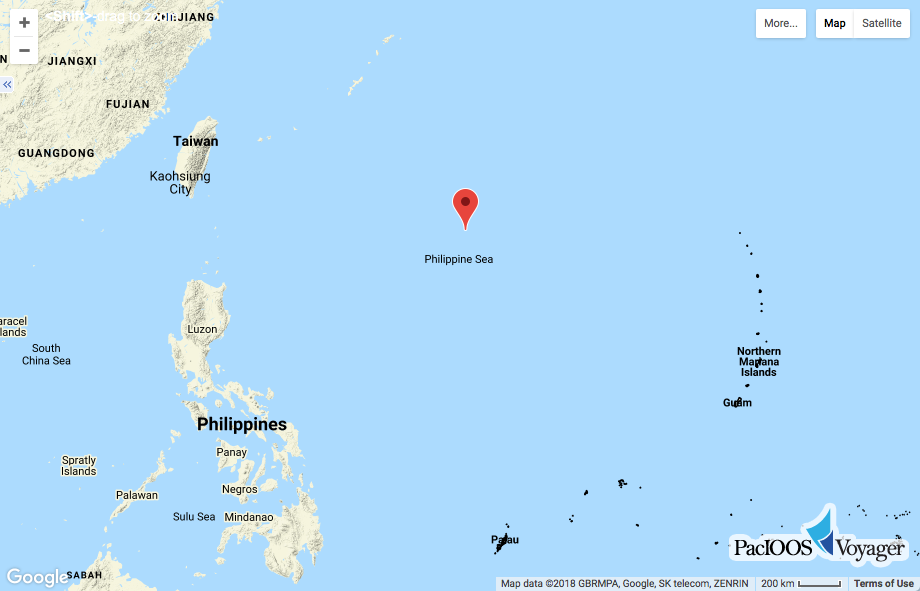 The PacIOOS wave buoy drifted from Saipan in the Northern Mariana Islands 800NM in the Philippine Sea.

After 46 days, the buoy had already drifted 920 statute miles (800 NM) offshore making recovery extremely unlikely. By coincidence, the crew of U.S. Coast Guard Cutter Sequoia (WLB 215), stationed in Guam, was patrolling the high seas, bringing the ship to “the neighborhood” of the buoy. Knowing the wave buoy and its associated data are extremely important to a variety of stakeholders, the crew temporarily diverted from operations to retrieve the buoy. Sequoia is an ocean-going buoy tender and regularly services large buoys and other aids to navigation. Despite the challenging conditions of 8 to 10-foot seas and 28 – 35 mph winds, the crew was able to retrieve the wave buoy using the installed crane and hydraulic equipment, and safely transported the buoy back to Guam. As the lead federal agency protecting our nation’s Marine Transportation System and the primary regulator of the maritime shipping industry, the Coast Guard advances American prosperity by securing ports and waterways and ensuring vessel safety. Aids to navigation and support of state-of-the-art technology providing vital data for mariners, scientists and residents are one of the ways that is done. (Find out more in the U.S. Coast Guard’s Maritime Commerce Strategic Outlook). 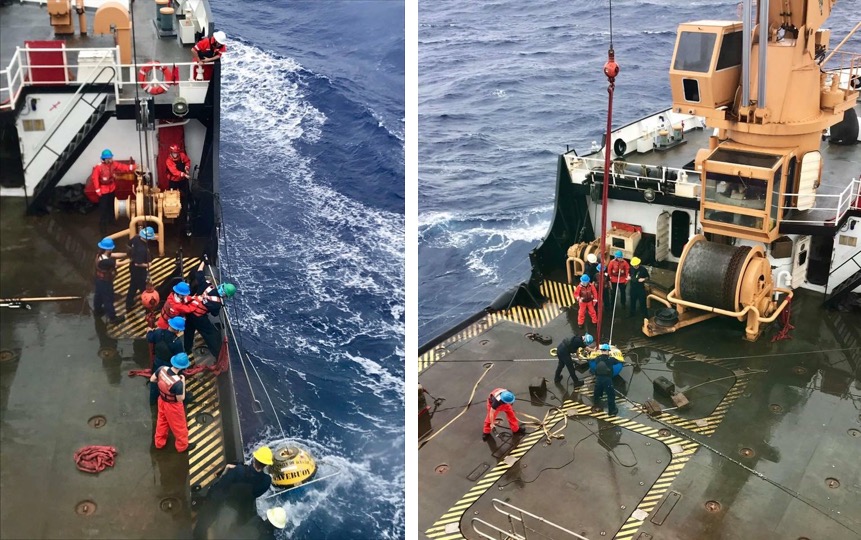 Crew from the U.S. Coast Guard Cutter Sequoia recover and secure the PacIOOS wave buoy onboard.

PacIOOS maintains a network of 15 wave buoys, three of which are located within the Mariana Islands (off Ipan and Ritidian Point, Guam, and off Tanapag, Saipan). All wave buoys provide real-time information on significant wave height, period, and direction, as well as sea surface temperature. The freely available data are crucial for federal and local agencies, as well as for commercial and recreational ocean users. For example, NOAA’s National Weather Service (NWS) Forecast Office in Guam heavily relies on the wave information to assess ocean conditions, generate forecasts, and formulate high surf and rip current advisories and warnings for the public. Real-time ocean observations are limited throughout the region, magnifying the value and need of the PacIOOS wave buoys.

Roger Edson, Science and Operations Officer at the NWS Forecast Office Guam, says, “We rely on a multitude of satellite data for issuing forecasts and advisories, but satellites only indirectly determine important ocean parameters. The PacIOOS wave buoys are our only routine source of directly measured nearshore ocean observations, allowing us to calibrate the satellite-derived ocean data.” He adds, “Waves can change dramatically in time and location so it is vital to have buoys in good strategic locations around the islands in order to be able to see approaches from all directions and ensure a 360 degree view.”

24/7 wave data are invaluable for making safe decisions, contributing to lives saved along the shorelines and at sea. As a program with limited funding, PacIOOS would not have been able to replace the buoy with its existing budget. We are extremely grateful for the U.S. Coast Guard’s efforts and support to recover the Tanapag wave buoy! Mahalo!