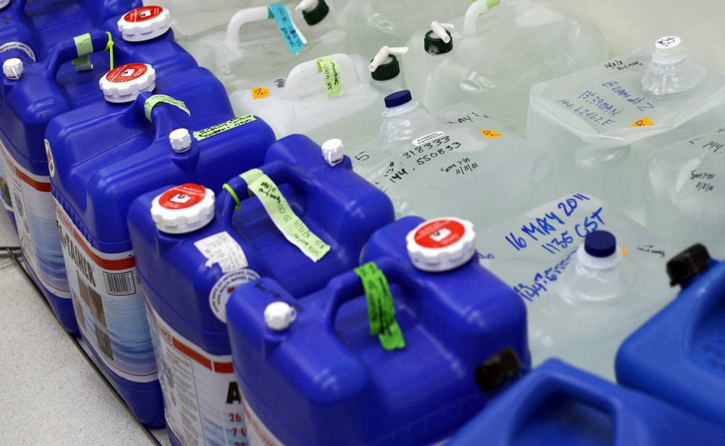 More than 1,000 gallons of sea water were processed for cesium analysis in Dulai’s lab between March 2011 and 2013.

The Tohoku earthquake and subsequent tsunami on March 11, 2011, led to power failures that prevented the proper cooling of several reactors at the Fukushima Dai-ichi Nuclear Power Plant (NPP). Several reactor units and their containments were damaged by hydrogen explosions, which allowed radioactive gases to escape into the atmosphere. Three reactors experienced partial core meltdown. To suppress further overheating they were cooled by sea water, which then drained into the ocean carrying radioactivity with it. There were several subsequent leaks of highly radioactive water into the ocean. This was the largest accidental release of radioactivity into the ocean ever. The radioactive isotopes, or radionuclides, that escaped in the highest amounts were iodine-131 (I-131), cesium-137 (Cs-137), and cesium-134 (Cs-134).

The data presented here have been published in the Special Issue of Biogeosciences: Impacts of the Fukushima nuclear power plant discharges on the ocean and can be cited as follows:

These results report on radiocesium activities in ocean water. If you are interested in learning about the propagation of these isotopes through the food chain and reading an interesting story on tuna migration, please see the special issue of Oceanus prepared by colleagues and collaborators from the Woods Hole Oceanographic Institution. Another source where you can learn more about the effects that Fukushima had on Hawaiʻi is the State of Hawaiʻi Department of Health (DOH) at http://health.hawaii.gov/about/current-public-health-concerns-related-to-japan/.

This material is based upon work supported by the U.S. National Science Foundation (NSF) under grant number RAPID OCE-1137412, the Gordon and Betty Moore Foundation, and the School of Ocean and Earth Science and Technology (SOEST) of the University of Hawaiʻi at Mānoa. Any opinions, findings, conclusions, or recommendations expressed in this material are those of the authors and do not necessarily reflect the views of these funding agencies.

The unit in which radioactivity measurements are commonly reported is the becquerel (Bq), named after Henri Becquerel who discovered radioactivity in 1896. Bq represents the number of radioactive decays per second in a volume or mass of material. For sea water and air we use the unit of Bq/m3 (becquerels per meter cubed). The EPA and other regulatory agencies may use different units such as pCi (pico Curie), which is equal to 0.037 Bq. 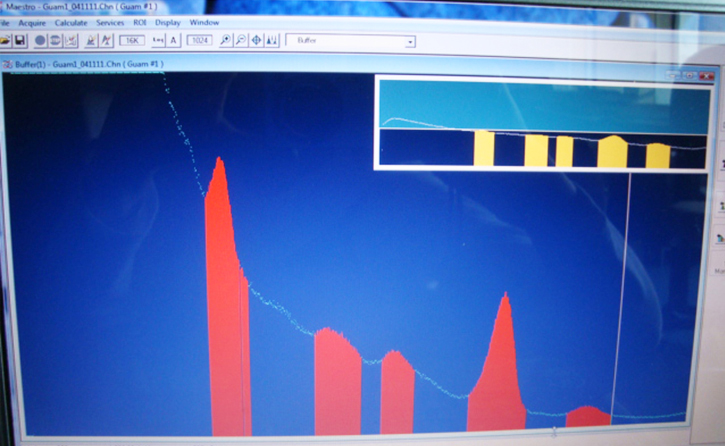 Water samples were analyzed by a gamma-spectrometer, which can identify each cesium isotope based on its gamma-radiation. The areas highlighted in red show several gamma-peaks, some from natural radioactivity in the ocean as well as cesium-134 and cesium-137.

Atmospheric contamination arising from the accident was picked up by air masses, and about 80% of it was carried over the Pacific Ocean where it got deposited or carried further by winds. It was only a matter of days before radiation in the air dispersed across the northern hemisphere. Fukushima-related radionuclides in the atmosphere were registered by air- and rainwater monitoring systems operated by the U.S. Environmental Protection Agency (EPA) across the U.S. and Pacific Islands, particularly in Guam, Saipan, Hawaiʻi, Alaska, Washington, California, Idaho, Nevada, and even on the east coast in Massachusetts and Pennsylvania. On March 22, 2011, the EPA reported that, “As of 6:30pm (EDT) preliminary monitor results in Hawaiʻi detected minuscule levels of an isotope that is consistent with the Japanese nuclear incident. This detection varies from background and historical data in Hawaiʻi.” Radiation monitors in Hilo and Honolulu operate continuously and measure beta radiation-emitting radionuclides in the air that come from both natural and man-made sources. Around March 20, 2011, the levels of beta radiation started increasing and the peak lasted for about one week, after which radiation in air returned to background levels (see Figure 1). Other monitors around the Pacific islands showed a similar response. While this was an indication of an unusual level of radioactivity due to atmospheric releases from the Dai-ichi NPP, the levels were considered safe and well below public health concerns.

In the past, the Pacific Ocean has received atmospheric fallout of man-made radionuclides from the more than 500 atmospheric nuclear weapons tests performed between 1945-1980, and the Chernobyl NPP accident in 1986. We can still see remnants of those inputs. For example, cesium-137 has a 30-year half-life and is expected to decay to undetectable levels in about six half-lives, or 180 years. Cesium-137 levels in various places across the North Pacific were in the range of 1.7-2.8 Bq/m3 in the year 2000. However, no observations have been made in Hawaiʻi since the 1980’s. Based on activities observed in other parts of the Pacific, the authors estimated the levels around Hawaiʻi to be ~1.5 Bq/m3 in 2011. The other isotope of cesium, cesium-134, has a half-life of only 2 years so any fallout from the weapons tests or the Chernobyl accident has long decayed. Iodine-131 has an 8-day half-life and only very recent inputs within 50-60 days can be identified. Dr. Henrietta Dulai’s research group in the Department of Geology and Geophysics at the University of Hawaiʻi at Mānoa started monitoring sea water radiocesium concentrations immediately after the Fukushima Dai-ichi NPP accident. They collected ocean samples near Honolulu (see Figure 2), while the Hawaiʻi Ocean Time-series (HOT) program provided them with monthly offshore water samples from Station ALOHA, located 100 miles north of Oʻahu. In addition, the Dulai group received samples from Guam collected by colleagues at the University of Guam as well as samples from the Midway Islands collected by the Sea Education Association (SEA). 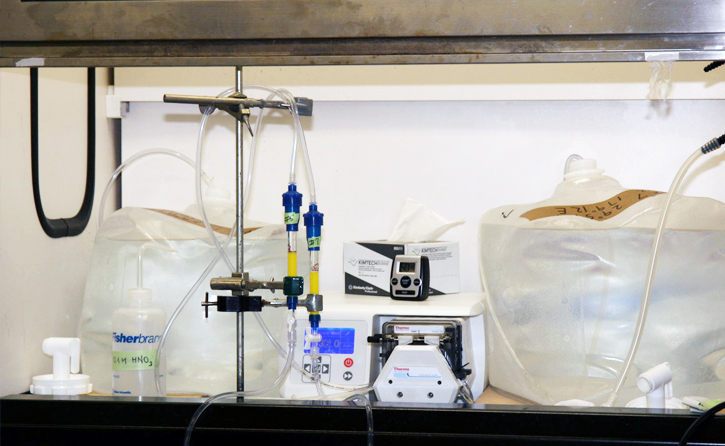 Cesium isotopes were concentrated from 20 100-liter samples for each analysis. The authors developed a new high-efficiency method that allows the detection of very low amounts of cesium, about 18,000 atoms in a liter of water.

All samples collected in the Central Pacific in March and April of 2011 were expected to carry only atmospheric fallout signatures, if any, as oceanic discharges could not travel to the Central Pacific that quickly. In all samples cesium-134 was below the detection limit (see Data Table), meaning that if present this isotope was in such small quantities that it was undetectable with the techniques employed. The detection limit for both cesium-137 and cesium-134 was 0.1-0.6 Bq/m3, which translates to an atmospheric deposition of less then 10 Bq per area of 1 m2 of ocean surface. Cesium-137 was detected in all samples at levels corresponding to remnants of the fallout from previous atmospheric weapons tests and the Chernobyl NPP accident (see Data Table). These results indicate that atmospheric fallout of cesium did not contribute any long-term measurable levels to the radioactivity of the ocean in the Hawaiʻi region. The radioactive fallout was mixed and diluted in the ocean to undetectable levels. Iodine-131 also caused some concern as it has been identified by the EPA in atmospheric fallout and milk in Hawaiʻi; however, the Dulai laboratory is not equipped for its analysis. 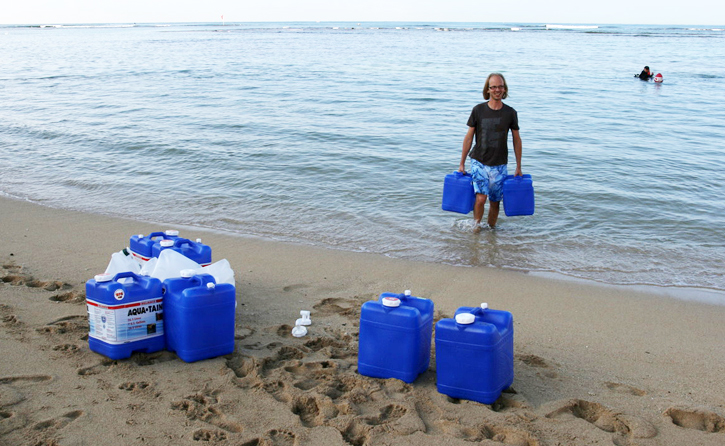 The atmospheric releases of radionuclides from the Dai-ichi NPP were followed by discharges of highly radioactive water into the ocean. These discharges were predicted to be carried by currents and dispersed across the Pacific Ocean. In 2011 and 2012, we investigated the distribution of radiation between Japan and Hawaiʻi to evaluate the potential for the radioactive plume to reach the islands (see Figure 2). We participated on a scientific cruise organized by scientists from the Woods Hole Oceanographic Institution and funded by the Gordon and Betty Moore Foundation aboard the University of Hawaiʻi at Mānoa research vessel R/V Kaʻimikai-O-Kanaloa (R/V KOK). Surface ocean samples collected between Japan and Hawaiʻi were analyzed for cesium isotopes. While Fukushima related radionuclides were found along latitudes 30-34°N between longitudes 155-180°W, the levels were rather low: < 12 Bq/m3, or < 10 times pre-Fukushima levels of each isotope (see Data Table). This is in contrast to much higher values—about 1,000 times the pre-Fukushima level—found in the ocean water near Japan that same month.

In June 2012, two Pangaea Exploration research cruises collected samples for the authors in the same area as the year before. In 2012, cesium-134 was detected over a wider geographic area than in 2011, but the activities measured were even lower (1-4 Bq/m3). These results showed that the southern boundary of the Kuroshio and Kuroshio extension currents effectively prevented the southward spreading of radionuclides released to the ocean (see Figure 3). Fortunately for Hawaiʻi, due to climatic conditions the Kuroshio extension and North Pacific currents were deflected north of the main Hawaiian Islands throughout 2011 so the radiation dispersed north of the islands. This has implications on cesium activities measured near the main Hawaiian Islands as discussed next.

The Dulai group continuously monitored oceanic cesium activities around Oʻahu because models predicted that the radiation plume released to the ocean would reach the main Hawaiian Islands in about 1-2 years. What is favorable for the islands in this prediction is that by that time the activity of cesium-134, which has a 2-year half-life, would be halved. Also, the longer it takes for the plume to reach Hawaiʻi the more the horizontal and vertical mixing processes dilute concentrations of radionuclides in the plume. The authors analyzed surface ocean samples from Station ALOHA and Honolulu monthly between March 2011 and March 2016. Cesium-137 was consistently measured at around 1.5 Bq/m3 in all samples (see Figure 4) while cesium-134 was never detected in any of these samples. Contrary to model predictions, the authors concluded that the radiation plume had not reached Hawaiʻi in detectable concentrations within 60 months of its release from Fukushima. They subsequently sampled every 6 months for further monitoring. 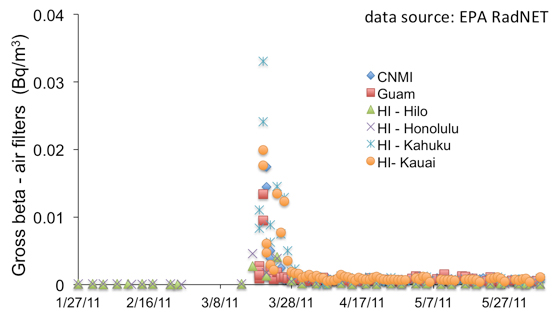 The EPA’s RadNet monitoring network performs regular year-round gross beta radiation measurements on air filters in Hilo and Honolulu, Hawaiʻi. This monitoring only measures the sum of beta radiation of all radionuclides and does not provide information about the identity of the nuclides. In the Pacific Islands, an increase in beta activity was observed in Guam, the Commonwealth of the Northern Marianna Islands (CNMI), and Hawaiʻi after the Fukushima accident. This triggered efforts to collect samples in which specific radionuclides could be identified. The Hawaiʻi Department of Health deployed samplers to analyze for specific radionuclides and found cesium-137, cesium-134, tellurium-132, iodine-132, and iodine-131, which are indicative of Fukushima releases. 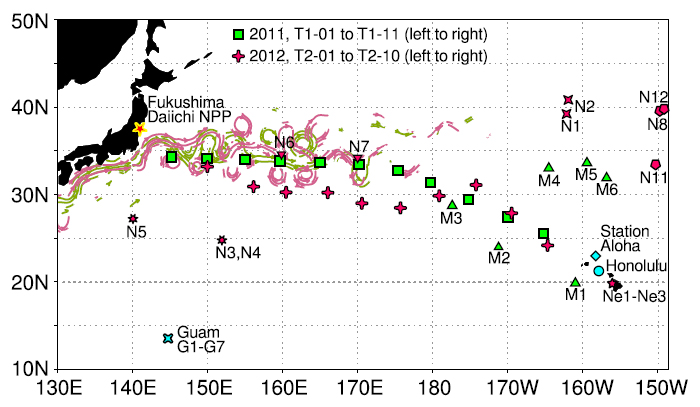 Map of the western North Pacific with Hawaiʻi in the bottom right corner. The triangles represent sample collection locations between March and May of 2011, including coastal and offshore time series stations on Oʻahu. The green squares and red crosses represent sampling locations on the two ship transects between Japan and Hawaiʻi visited in June 2011 and June 2012, respectively. All other symbols indicate sampling locations between June and September 2012. See Data Table for cesium concentrations. The green (2011) and red (2012) lines visualize ocean currents calculated by the SCUD model with velocity exceeding 0.4 m/s that form the Kuroshio and Kuroshio extension currents (see Figure 3). 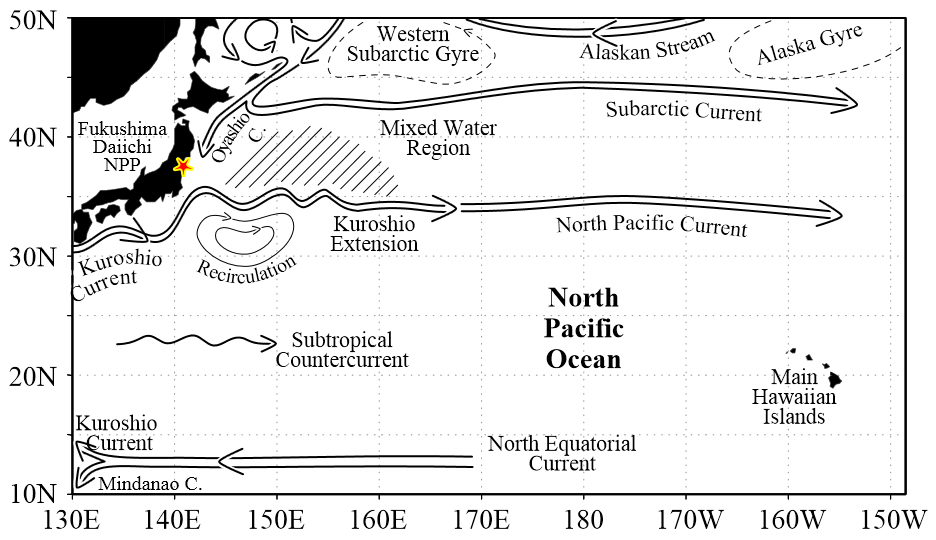 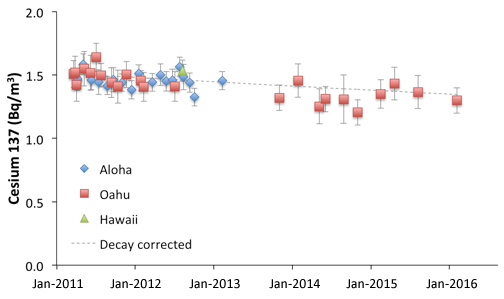