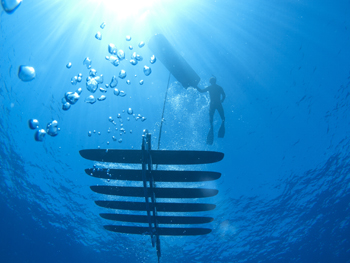 Wave Gliders® are able to travel long distances (2,500+ miles), hold station, and monitor vast areas without ever needing to refuel by continuously harvesting wave energy from the environment. Engineered by Liquid Robotics, Inc., their unique two-part architecture and wing system directly converts wave motion into thrust while solar panels provide electricity for sensor payloads. This means that Wave Gliders can travel to a distant area, collect data, and return for maintenance without ever requiring a ship to leave port.

The Wave Glider is a configurable platform designed to support a wide variety of sensor payloads. Data are transmitted to shore via satellite, and the continuous surface presence means that data can be delivered as they are collected. 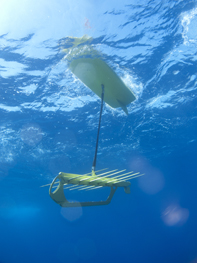 The following sensors are available for installation on the Wave Glider. The sampling interval for all sensors is 30 minutes.

This mission started off of the leeward, or western, coast of Hawaiʻi Island (Big Island), Hawaiʻi on October 23, 2013. The glider recorded wave height, wave direction, and wave period every half hour as it made its way to the Papahānaumokuākea Marine National Monument in the Northwestern Hawaiian Islands. It reached the National Oceanic and Atmospheric Administration (NOAA) National Data Buoy Center (NDBC) moored buoy 51101 on November 7, 2013 where it measured nearby wave heights as high as 21 feet (6.5 meters). This buoy is located 190 nautical miles northwest of Kauaʻi. Once the Wave Glider reached this buoy, it began retracing its path and returned to Big Island on December 6, 2013.

Click on the previews above to see enlarged images of the Aʻa Wave Glider data.

This mission started off of the leeward coast of Hawaiʻi Island on July 16, 2014. The glider recorded wave height, wave direction, and wave period every half hour as it made its way to the windward, or eastern, coast of the island. It traveled towards Hilo many times and recorded wave heights as high as 23 feet (7 meters) while it encountered Hurricane Iselle on August 7, 2014. The mission ended when the glider returned to Kawaihae Harbor on September 19, 2014.

Click on the previews above to see enlarged images of the Aʻa2 Wave Glider data.

This mission started off of the leeward coast of Hawaiʻi Island on September 12, 2014. Its time frame corresponded with Tropical Cyclone Ana as it passed over Hawaiʻi on October 17-20, 2014, during which time the glider continued to collect wave height measurements, reaching as high as 10 feet (3 meters). The mission remained off the leeward coast for its entire duration and returned to shore on November 21, 2014.

Click on the previews above to see enlarged images of the NC2 Wave Glider data.

Liquid Robotics, Inc. is an active member of the PacIOOS Governing Council Executive Committee. Beginning with an interest in recording whale songs in 2003, Liquid Robotics has expanded its passion for transforming ocean observation techniques through a network of wave-powered ocean robots. These instruments, including the Wave Glider®, solve critical problems for decision makers while making data collection and monitoring easier, safer, and more cost-effective.