PacIOOS Voyager now provides a variety of new data visualization and animation capabilities for viewing trajectories of ocean glider measurements. Ocean gliders are small, free-swimming, unmanned vehicles that can cruise the ocean autonomously for several months measuring various water properties. Their positions and data can be communicated via satellite and tracked over time.

So far, PacIOOS distributes data for two different types of ocean gliders: a wave glider that glides along the ocean surface and profiling gliders that alternately climb and dive in a sawtooth pattern through the top 1000 meters as they traverse the ocean. The wave glider is designed and operated by Liquid Robotics, Inc. while the profiling gliders are operated at the University of Hawaiʻi (UH) School of Ocean and Earth Science and Technology (SOEST) and designed at the University of Washington (UW) Applied Physics Laboratory (APL). Until now, Voyager only provided the wave glider (“A’a”)—it now also provides 12 profiling gliders whose missions span the period September 2008 through July 2013, primarily covering the waters south of Oʻahu. As additional glider missions are deployed, they will also be included.

Several features have been added to Voyager for mapping and plotting trajectories. Icons for the glider trajectory can now be color-coded by the observed wave heights, water temperatures, salinities, and other properites. For profiling gliders, the icons can also be scaled by the depth of each observation, such that smaller icons indicate deeper measurements while larger icons represent measurements nearer to the surface. For wave gliders, the direction of wave motion can also be shown as icon arrows. Hovering over an icon quickly shows you the measurement of the selected variable at that location (as well as its depth, for profiling gliders). Clicking on an icon provides a pop-up window with all available measurements at that particular point and time, along with options to convert units of measure.

Links are also provided for producing time series plots within the pop-up window at various time intervals. For profiling gliders, the time series plots include the measured variable (e.g. water temperature) as well as a plot showing glider depth over time. In addition to plotting, links are also provided for directly downloading the data in a variety of output formats: plain text (comma-separated values), an Excel spreadsheet, XML, or JSON. Lastly, links to the data archive and data source are provided for additional access methods and further information. The features in the pop-up window were designed to mirror Voyager’s pop-ups in other dynamic data overlays, such as near real-time station data (e.g. wave buoys), forecast models, and satellite data.

Users are encouraged to explore the available glider visualization options to meet their needs, many of which are contained in the “advanced” sub-menu of the “ocean gliders” folder within Voyager. For example, trajectories can be displayed with more or fewer points, with or without color-coding, with different colorbars, various icons, subsetting by date, time, and/or depth, etc. Furthermore, all of the selected options are recorded in the “link” utility of Voyager’s upper-right menu bar for revisiting the glider later or for sharing your view with others. Below are some example screenshots and screen recordings to illustrate the different types of glider visualizations and animations now possible in Voyager:

Same as above but showing a 24-hour time series plot of water temperature versus glider depth in the pop-up window (click here for larger image): 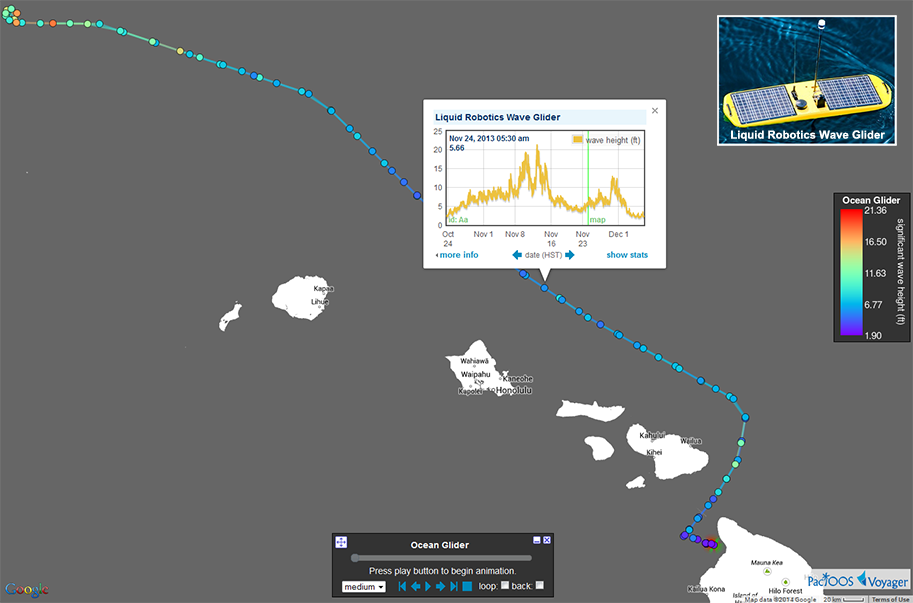 Same as above (color-coded wave heights) but including arrows pointing in the direction of wave motion (click here for larger image): 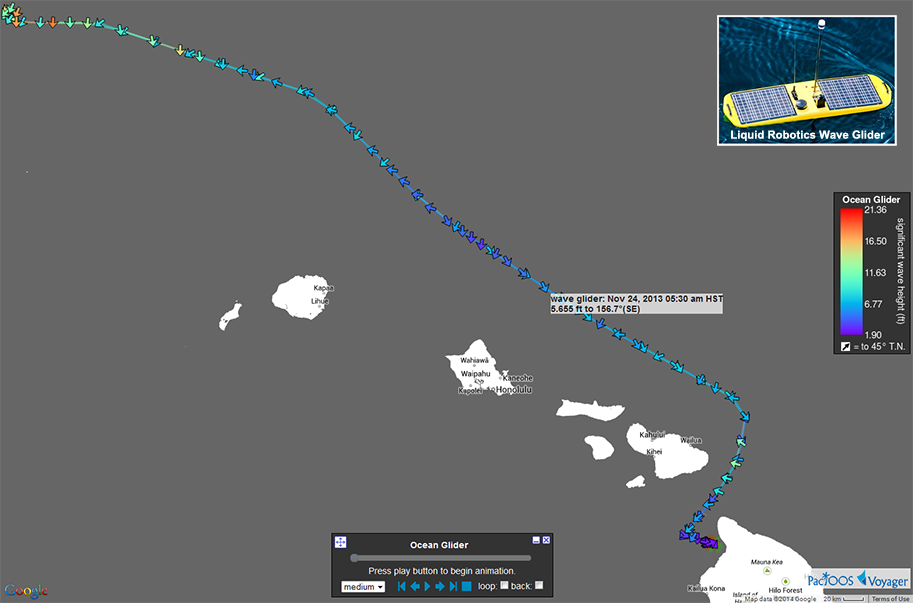 Alternative glider visualizations (others possible): (a.) showing only the end points, with custom icons; (b.) showing the glider track with a single color: