Voyager now includes a new wave run-up forecast for Majuro Atoll in the Republic of the Marshall Islands (RMI). Developed by Martin Guiles, Doug Luther, and Mark Merrifield of the University of Hawaiʻi at Mānoa, this new PacIOOS dataset provides a 6-day forecast of the potential for high sea level and wave inundation along the ocean-facing shorelines of Majuro due to the combination of wave run-up, tides, winds, and ocean currents. This complements our existing wave run-up forecasts at Waikīkī and Oʻahu’s North Shore in Hawaiʻi. The overlay can be found in Voyager’s “hazards: forecasts” category (go there now).

Majuro wave run-up forecast on November 4, 2014—times listed in Marshall Islands Time (MHT); if the index reaches a value of 100 (dashed red line), inundation is likely in low-lying areas. Click on the image for further details: 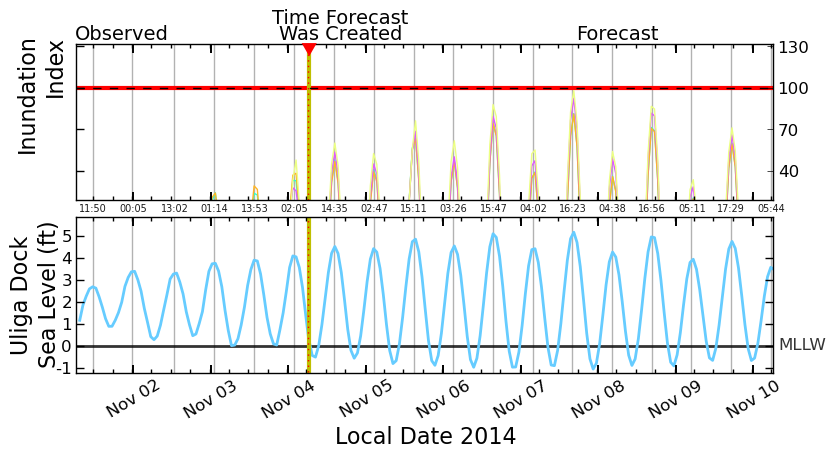 Wave run-up is the maximum height reached by waves along the shore relative to low tide—specifically, mean lower low water (MLLW), which is the average height of the lowest recorded tide. This forecast can alert Majuro up to six days in advance of the potential for beach flooding and/or overtopping of nearby roadways. However, this forecast is experimental and no promise of accuracy is implied. Please note that the forecast is explicitly not accurate when either a tsunami, tropical storm, or hurricane warning is in effect.