PacIOOS recently deployed new high-frequency radio (HFR) antenna arrays to estimate surface currents in and around Hilo Bay on the windward (Eastern) coast of Hawaiʻi Island (Big Island), extending our HFR capabilities beyond Oʻahu for the first time. These low-power radio transmitters listen for the Doppler-shifted signal reflected back from the ocean to derive the direction and speed of surface currents. Stationed at Pepeʻekeo and Keaukaha at the northern and southern edges of the bay, respectively, the overlap in detection between these two sites extends 15 miles offshore of Hilo Harbor.

As before, HFR overlays can be found in Voyager in a category titled “surface currents (HFR)” under the “remote sensing” folder. To accommodate this new HFR location, the category now includes a pull-down menu that allows users to select between Oʻahu and Hilo. Even though data for both locations are included in the overlay, choosing a location from this pull-down menu zooms to the selected coverage area and records its latest available timestamp automatically (there may be times when one site has more recent data than the other, depending on outages and other factors).

Voyager screenshot of Hilo HFR overlay for June 10, 2015 at 11:00 AM HST; locations of antenna arrays labeled with red radio icons: 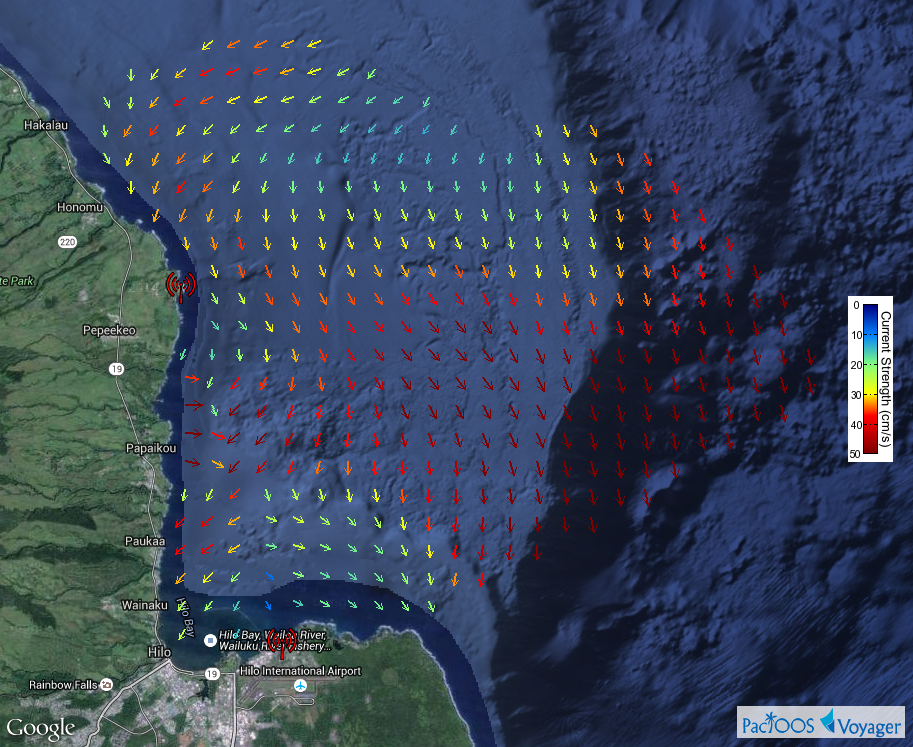 Voyager screenshot of pop-up window when clicking on the HFR overlay: 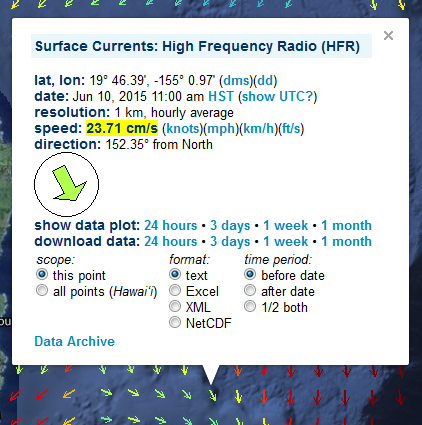 Maps of surface currents are available across the United States as part of the National HFRNet. Overlays are provided in a variety of spatial resolutions (1 km, 2 km, 6 km) and temporal resolutions (hourly or daily).

These data were generated as part of an academic research project. Accuracy cannot be guaranteed and caution is advised. While considerable effort has been made to implement all data components in a thorough, correct, and accurate manner, numerous sources of error are possible. Principal investigator Pierre Flament specifically cautions users regarding dilution of precision in the line joining the two HFR sites (Pepeʻekeo and Keaukaha). Along this line, the component of the vectors orthogonal to the line cannot be resolved and is extremely noisy.