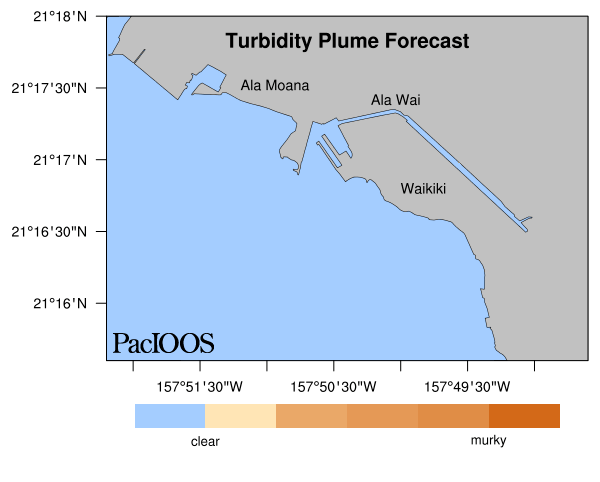 This animation shows the predicted turbidity from the Ala Wai canal, Honolulu, Oʻahu. It is updated daily at 11:30 AM HST.

Caution: The above model is experimental and no promise of accuracy is implied for the plume position and turbidity values.

Turbidity is a measure of water clarity, which helps to assess water quality in the nearshore environment. Higher turbidity levels mean an increased number of tiny solids are suspended in the water column, resulting in “murky” water.

The suspension of solids can be caused by a number of factors, such as rainfall, waves, wind, or tidal movement. Very high turbidity levels are normally a result of large amounts of storm water runoff from land that is entering coastal waters. This storm water runoff, often referred to as “brown water”, can contain pollutants and contaminants, including sewage, harmful micro-organisms, and chemicals from residential, commercial, and recreational sources.

The Turbidity Plume Model simulates the possiblity of a plume developing at the Ala Wai Canal, Oʻahu. The plume position and turbidity values are determined by the results of the ROMS Ocean Circulation Model configured for Waikīkī with input from SWAN (waves) and WRF (atmosphere). The model also uses near real-time river runoff and turbidity measurements from the Mānoa-Palolo stream that flow into the Ala Wai Canal.

Low turbidity levels (beige) are a result of regular ocean conditions. If however the model shows a dark orange plume, meaning very high levels of turbidity, the results could indicate the fate of large discharges from the Ala Wai due to heavy rains or other events and the generation of a coastal “brown water” plume. Please visit the State of Hawaiʻi Department of Health Clean Water Branch (CWB) for more information on storm water runoff.

The model data were generated as part of an academic research project, and the principal investigator, Brian Powell, asks to be informed of intent for scientific use and appropriate acknowledgment given in any publications arising therefrom. The data are provided free of charge, without warranty of any kind.

Note: This example is an extreme event that typically occurs every few years.

The animation below serves as an example of a high rainfall event in December 2017, resulting in a large turbidity plume off the coast of Waikīkī. The movement and lifespan of the turbidity plume through time depends on oceanic and atmospheric conditions. Examples of a few mechanisms that can affect the turbidity plume are: tidal currents, freshwater outflow, as well as wind speed and direction.