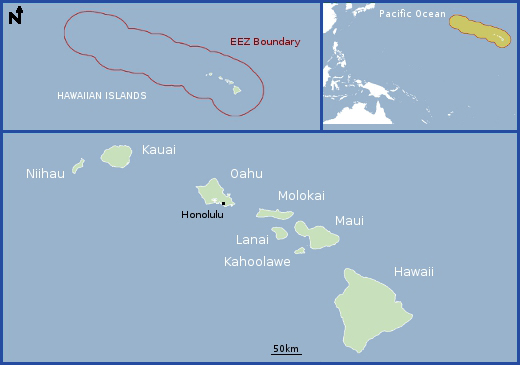 Discovered by Polynesians between the 3rd and 7th centuries A.D. and later by British Captain James Cook in 1778. Hawaiʻi became the 50th state on August 21, 1959. Honolulu, the State Capital is located on the Island of Oʻahu.

Hawaiʻi is a string of 137 islands encompassing a land area of 6,422.6 square miles in the north central Pacific Ocean about 2,400 miles from the west coast of the continental United States. Stretching from northwest to southeast, the major islands are: Niʻihau, Kauaʻi, Oʻahu, Molokaʻi, Lānaʻi, Kahoʻolawe, Maui, and Hawaiʻi Island. Hawaiʻi’s climate features mild temperatures, moderate humidity and cooling trade winds.

The Hawaiian Islands are at the southeastern end of a chain of volcanoes that began to form more than 70 million years ago. Many of these volcanoes formed islands that have subsided and eroded beneath sea level, and some of the old volcanoes probably never reached sea level. Each Hawaiian island is made of one or more volcanoes, which first erupted on the sea floor and only emerged above the ocean’s surface after countless eruptions. The largest and most southeastern island of the chain, Hawaiʻi, consists of five volcanoes. Kīlauea, Mauna Loa, and Hualālai have erupted in the past 200 years. Lōʻihi, the youngest volcano of the Hawaiian Volcanic Chain, is still about 1,000 meters beneath the ocean’s surface. East Maui Volcano, commonly known as Haleakalā, on the island of Maui, is the only other Hawaiian volcano to have erupted since the late 1700s.

Over the past 70 million years, the combined processes of magma formation, volcano eruption and growth, and continued movement of the Pacific Plate over the stationary Hawaiian “hot-spot” have left a long trail of volcanoes across the Pacific Ocean floor. The Hawaiian Ridge-Emperor Seamounts chain extends some 6,000 kilometers from the “Big Island” of Hawaiʻi to the Aleutian Trench off Alaska. The Hawaiian Islands themselves are a very small part of the chain and are the youngest islands in the immense, mostly submarine mountain chain composed of more than 80 volcanoes. The length of the Hawaiian Ridge segment alone, from the Big Island northwest to Midway Island, is about equal to the distance from Washington, D.C. to Denver, Colorado (2,600 kilometers). The amount of lava erupted to form the Hawaiian-Emperor chain is calculated to be at least 750,000 cubic kilometers—more than enough to blanket the entire State of California with a layer of lava roughly 1.5 kilometers thick.