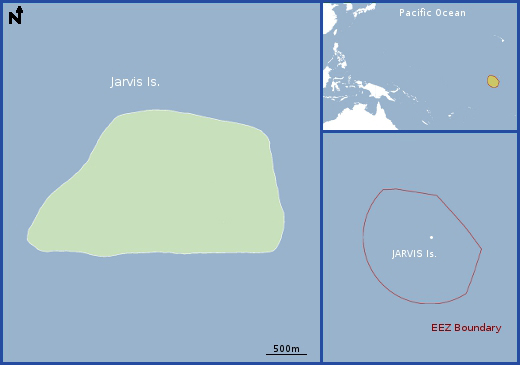 Jarvis Island was discovered in 1821 by Captain Brown on the British ship Eliza Francis. Alfred G. Benson and Charles H. Judd took formal possession of the island in 1857 in the name of the American Guano Company of New York. Later that year, Commander Charles Henry Davis of the USS St. Mary surveyed the island and formally claimed it for the United States. Jarvis Island was mined for guano in the late 1800s. Under the Guano Act of 1856, it became a U.S. possession. Jarvis was abandoned in 1879 after many tonnes of guano had been removed. The United Kingdom annexed the island in 1889, but did not further develop the mining operations. In 1906 it was leased to the Pacific Phosphate Company of London, but again mining was not further developed. The United States reoccupied and reclaimed Jarvis in 1935 and it was placed under the juris­diction of the Department of the Interior on May 13, 1936 (Executive Order 7368). The new colonists were evacuated from the island in 1942 following attacks by Japanese forces, and the island has remained mostly uninhabited since then. In 1957-1958, Millersville, on the western side of the island, was occupied by scientists during the International Geophysi­cal Year. Since June 1974, the island has been administered by the U.S. Department of the Interior Fish and Wildlife Ser­vice as part of the National Wildlife Refuge system.

Jarvis Island is located just south of the equator about 1,850 kilometers east of Howland and Baker Islands. The island is about 3.2 kilometers long and 1.6 kilometers wide. Jarvis consists of a relatively flat (mostly 4.6 to 6.1 meters high; maximum 7 meters), sandy, coral island platform with a lower central basin and a narrow fringing reef. A submarine terrace (water depth 4 to 20 meters) extends to one kilometer offshore. The island is described as tropical with little rainfall, constant wind, and burning sun.

Jarvis Island is part of the Line Islands linear volcanic chain, most of which is part of Kiribati. This linear array of islands and seamounts has been considered a hot-spot trace similar to that of Hawaiʻi, but recent work has shown that the age of volcanoes is nearly the same along major segments of the chain. This suggests nearly coeval volcanism along a pre­existing zone of weakness. A few small to moderate-size sea­mounts occur within the Jarvis Island EEZ, with ages of about 70 to 40 million years. The dominant sea-floor topography is an abyssal plain more than 5,000 meters deep. Sediment in the south and west parts of the EEZ is siliceous ooze, whereas in the north and east it is carbonate ooze.