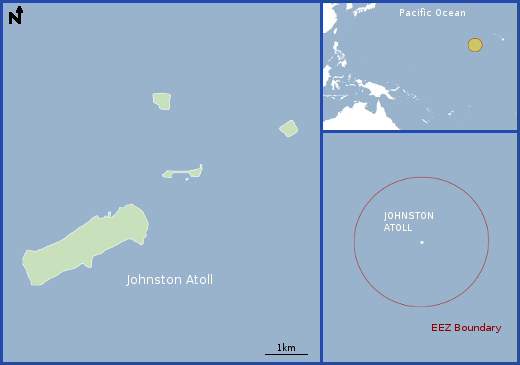 Johnston Atoll was sighted in 1796 by the U.S. Brig Sally under the command of Joseph Pierpoint, but it was named for Captain James Johnston of the HBMS Cornwallis, who claimed its official discovery on December 14, 1807. In March 1858, the captain of the U.S. schooner Palestine claimed the island for the United States, and three months later the island was claimed by Captain Watson of the Hawaiian schooner Kalama for the Kingdom of Hawaiʻi. Two crew members from the schooner Palestine were left on the island to collect phosphate. The island was annexed to the United States as a guano island under the Guano Act of 1856. A large amount of guano was removed from the atoll between the late 1850s and the early 1900s. The atoll did not have a permanent population until 1936.

On July 29, 1926, President Calvin Coolidge established Johnston Atoll as a Federal bird refuge by Executive Order 4467 and placed it under the control of the U.S. Department of Agriculture. On December 29, 1934, Executive Order 6935 by President Franklin Roosevelt transferred control of John­ston Atoll jointly to the U.S. Navy to establish an air station and also to the Department of the Interior to administer the bird refuge. In 1936, the U.S. Navy began developing a sea­plane base, an airstrip, and refueling facilities. These facilities served as an important link between Hawaiʻi and the western Pacific during World War II. The atoll was fortified during the war and used as a supply point for submarines.

The Secretary of the Navy agreed to transfer operational control of Johnston Atoll to the U.S. Air Force on July 1, 1948, to be used for nuclear testing. Johnston Atoll was used as the launch site for atmospheric nuclear weapons tests in the 1950s and 1960s. In the 1960s, three missiles carrying nuclear warheads were destroyed by non-nuclear explosions, one on the launch pad and two at altitudes of 9 and 33 kilometers, which spread plutonium- and uranium-containing particles over the atoll. The Department of the Air Force signed an agreement with the Defense Nuclear Agency on July 1, 1973, to administer and host-manage the island. In the 1990s, the atoll was used as a site for a Chemical Agent Disposal System (JACADS) that incinerated chemical weapons. The Atoll is now administered by the U.S. Defense Threat Reduction Agency and managed cooperatively with the U.S. Fish and Wildlife Service as part of the National Wildlife Refuge system.

Johnston Atoll is located about 1,330 kilometers west-southwest of Honolulu. The atoll is highly modified and consists of one large island (Johnston Island) and several small islets (Akau, Sand, Hikina) in a lagoon flanked by a barrier reef only on the northwest margin of the atoll. Johnston and Sand Islands are natural islands that have been significantly expanded by coral dredging, whereas Akau and Hikina Islands are entirely manmade from coral dredged from the reef. Johnston Island, a flat sand-and-coral island with a highest elevation of about 4 to 5 meters, is flat because it was leveled for construction purposes, such as the building of a runway.

Johnston Atoll is the northernmost island in the Line Islands chain. All but the northwest part of the atoll barrier reef has subsided, and reef growth has been unable to keep pace with the rate of subsidence; it may be in transition from an atoll to a seamount. The volcanic pedestal below Johnston Atoll is about 71 million years old. The Johnston Atoll EEZ consists of a complex array of Cretaceous (86 to 69 million years old) volcanic ridges and seamounts. Karin Ridge is 86 to 81 million years old and is the largest volcanic edifice in the EEZ. It trends northwest-southeast and is continuous with the Line Islands ridge to the southeast of the EEZ. Karin Ridge has been sampled for cobalt-rich iron-manganese crusts during two USGS cruises. Horizon Guyot, an elongate flat-topped seamount, trends northeast-southwest, nearly at right angles to Karin Ridge, and is 82 million years old. Horizon Guyot has also been sampled for crusts on USGS and other cruises. Keli Ridge is 72 to 69 million years old and trends more east-west than Karin Ridge. Keli Ridge has been sampled for crusts during two German cruises. The flat summit of Horizon Guyot is sediment covered, whereas the summits of Karin and Keli Ridges are mostly free of sediment.