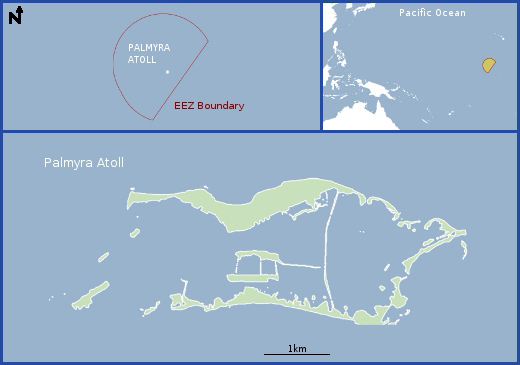 Palmyra Atoll is located about 1,713 and 1,778 kilometers south of Honolulu, respectively. Palmyra Atoll was named on November 7, 1802, for the U.S. ship Palmyra commanded by Captain Sawle, but was probably first sighted four years earlier by Captain Edmund Fanning aboard the American ship Betsy. On the orders of King Kamehameha IV, Hawaiʻi annexed Palmyra in 1862. The United States later annexed it along with the Hawaiian Islands by the joint resolution of Congress of 1898. Later, Congress excluded Palmyra from the Hawaiian boundaries in the Hawaiʻi Statehood Act.

The atoll changed private ownership four times between 1888 and 1911. In 1911, Judge Henry E. Cooper of Hono­lulu acquired title to the island and used it for growing coconuts. He sold all but two islets to Leslie and Ellen Ful­lard-Leo in August 1922. When the judge died in 1929, his two islets (Home Islands) were passed to his heirs. Until 2000, ownership of the rest of Palmyra was shared by Ful­lard-Leo’s three sons, Leslie, Dudley, and Ainsley, who live in Hawaiʻi.

During World War II, the U.S. Navy had 600 person­nel on the island. The navy dredged a seaplane runway that merged the two western lagoons into one, built a causeway on the remaining reef, and joined three of the former islets into one. They also built an 1,800-meter runway that was used by the U.S. Air Force until 1961 but is now unservice­able. It took the Fullard-Leo family many court battles to reclaim Palmyra from the military after the war, which were finally settled by a Supreme Court decision in 1947. In December 2000, the Nature Conservancy purchased Palmyra Atoll for about $30 million from the three Fullard-Leo brothers. The following January, the U.S. Fish and Wildlife Service approved a National Wildlife Refuge for Palmyra, and for Kingman Reef as well.

Palmyra Atoll is composed of about 50 islets forming a U-shape, surrounded by a barrier reef. There is a lagoon to the east of the islets as well as within the central part of the U-shape, which is open to the west. The islets are nearly flat with a maximum elevation of 2 meters, although trees up to about 25 meters tall make them look significantly higher. Palmyra Atoll has an equatorial climate that is hot and rainy.

The Cretaceous volcanoes that underlie Kingman Reef and Palmyra Atoll are part of the Line Islands volcanic chain. Three samples from seamounts in or near the EEZ give ages of 84, 70, and 69 million years. All of the seamounts within the EEZ probably have ages within that range of 84 to 69 million years. The Kingman-Palmyra EEZ contains about seven large seamount complexes and ridges, as well as smaller edifices. The remainder of the EEZ consists of sediment-covered abyssal plain at water depths of about 4,000 to 4,800 meters. The very large S.P. Lee Guyot (80 by 125 kilometers) was sampled on a USGS cruise and found to be about 80 per­cent sediment covered on its summit and upper flanks, with the remainder coated with rather thin cobalt-rich iron-manganese crusts. Several other seamounts in the EEZ and just outside the northern EEZ boundary have also been sampled and analyzed.