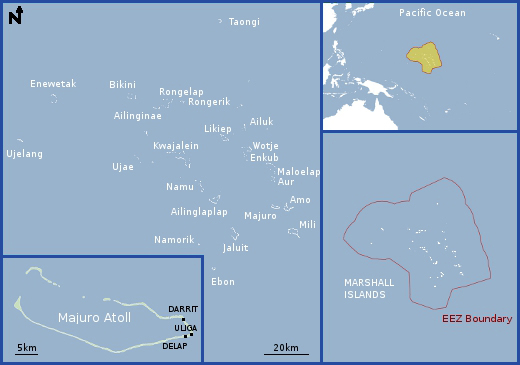 The Marshall Islands are part of Micronesia, which was populated by migrants from the Malaysian-Indonesian area thousands of years ago. Several atolls were visited by the Spanish in the early and middle 1500s, and the islands were subsequently claimed by Spain in l592 but were thereafter left more or less alone for nearly 300 years. Ger­many took over administration of the Marshall Islands in l885 and developed trading stations on Jalwoj and Epoon Atolls to support a flourishing copra (dried coconut) trade. Traditional Marshallese high chiefs (Iroij) ruled under indirect colonial German administration.

At the beginning of World War I, Japan took control of the Marshall Islands, first under civil and later under naval administration. Japan’s headquarters were located on Jalwoj Atoll. U.S. military troops took control from the Japanese in early l944 following major battles on Kuwajleen and Anewetak Atolls. In l947, the United States entered into agreement with the U.N. Security Council to administer the islands formerly administered by the Japanese. The new agreement was known as Trust Territory of the Pacific Islands (TTPI), of which the Marshall Islands were a part. The United States undertook nuclear testing on Pikinni and Anewetak Atolls from 1946 to 1958, with 69 test detonations. On May l, l979, the United States rec­ognized the Constitution of the Marshall Islands and the establishment of the Government of the Republic of the Marshall Islands. After nearly forty years of U.S. administration as a U.N. Trust Territory of the Pacific Islands, the Republic of the Marshall Islands attained independence on October 21, 1986, under a Compact of Free Association signed by President Ronald Reagan on that date. Under the Compact, the U.S. will continue use of the Kwajalein Atoll missile test range for at least 30 years.

Most of the Marshall Islands are atolls with low coral limestone and sand islets located between an outer barrier reef and a central lagoon. More than 1,200 islets make up the atolls. Some of the lagoons are huge. Kwajalein, which is used as a U.S. missile test range, has the largest lagoon (2,174 square kilometers) in the world and encompasses about 90 islets. The lagoons of the atolls have maximum water depths of about 10 to 100 meters. The highest elevation in the Marshall Islands is about 10 meters, which is located on Likiep Atoll. The atolls and islands are situated in two almost parallel northwest-southeast chains known as the Ratak (Sunrise) and Ralik (Sunset) groups.

The Marshall Islands EEZ consists predominantly of huge Cretaceous-age volcanic complexes, 34 of which are capped by atolls and reefs. However, most are seamounts with summits submerged from about 900 to 2,100 meters below sea level. Most of the seamounts are flat-topped guyots. Some of the seamounts are capped by submerged reefs, while others are capped by carbonate sediment, such as the large Wodejebato Guyot. Still others have volcanic rocks exposed at the surface. At least 100 small- to medium-size seamounts and 12 huge seamounts, or seamount complexes, occur within the EEZ. The measured areas of 19 guyots in the EEZ vary from 313 to 4,776 square kilometers. Conical seamounts are typically much smaller. Of the 15 that have been measured, all are between 505 and 793 square kilometers in area. Many seamounts in the EEZ have been dated, with ages ranging from 140 to 68 million years. These extinct volcanoes, formed by hot-spot volcanism, delineate at least four separate hot-spot traces.

The five islands in the Marshall Islands that are not atolls (Jemo, Majej, Kole, Jebat, Ellep) are low-lying carbonate platforms surrounded by fringing reefs. These reef islands are probably partly drowned atolls composed of a still emergent islet around which a fringing reef developed. The reef and limestone caps vary from about 350 to 1,400 meters thick, under which is volcanic bedrock.

The remainder of the EEZ is sediment-covered abyssal plain, which is located adjacent to the southwest, west, north, northeast, and east EEZ boundaries. Nine research cruises by U.S., Korean, Japanese, and German ships have been carried out within the Marshall Islands EEZ in search of cobalt-rich iron-manganese crusts. Phosphorite and bamboo coral were also collected incidentally on those research cruises. Cobalt-rich crusts are typically much thinner on the flanks of atolls than on the summits and flanks of seamounts. This is because reef debris from the atolls continually moves down the flanks by gravity processes, disturbing the ocean floor. The crusts must then begin new growth. Consequently, seamounts within the EEZ offer a much greater potential for thick crusts than the flanks of atolls.