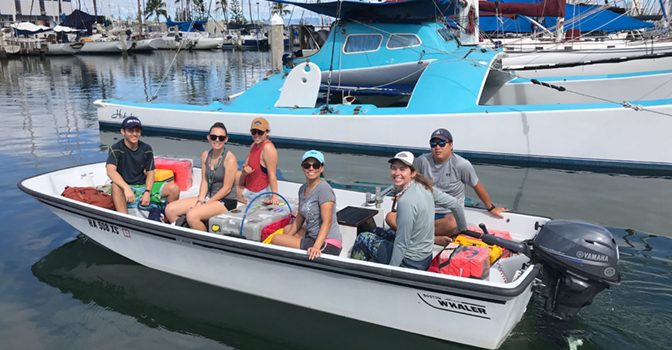 Recently published research led by University of Hawaiʻi (UH) at Mānoa scientists highlights the potential for using oceanographic sensors, including those maintained by the Pacific Islands Ocean Observing System (PacIOOS), to make accurate predictions of Vibrio vulnificus, an infectious bacterium, in the Ala Wai Canal in Waikīkī, Hawaiʻi. By assessing rainfall, water temperature, dissolved nutrients, and organic matter the team now has the ability to forecast potential spikes in levels of the bacteria.

V. vulnificus, a “flesh-eating” bacterium, lives naturally in the water of the Ala Wai Canal, but infections are rare. V. vulnificus has been relatively understudied in tropical ecosystems and further, the implications of climate change for this and other coastal human pathogens are generally unknown.

The research team collaborated with the UH Strategic Monitoring and Resilience Training in the Ala Wai Watershed (SMART Ala Wai Program) where at least 20 undergraduate students and six graduate students from the UH Mānoa School of Ocean and Earth Science and Technology (SOEST) participated in sample collection from the canal and processing at the Daniel K. Inouye Center for Microbial Oceanography: Research and Education (C-MORE).

Consistent with another recently published UH study, rainfall was found to be critically important for both elevating the pathogen’s abundance in the canal and transporting V. vulnificus to the adjacent Ala Wai Boat Harbor.

“We also found that measuring the amount of a particular kind of dissolved organic matter in the water significantly improved our model’s accuracy in predicting V. vulnificus abundance,” said lead author Jessica Bullington, who was pursuing her Master’s degree in the SOEST Department of Oceanography at the time of this work.

Water quality monitoring that involves collecting samples and analyzing them in a laboratory is expensive and often limited to select locations. Fortunately, PacIOOS maintains oceanographic sensors that continuously monitor water quality at the mouth of the Ala Wai Canal.

“What is really exciting about our research findings is the ability to use real-time and forecast data from PacIOOS—which includes water temperature, salinity, currents, and dissolved organic matter—to predict V. vulnificus abundance in the canal and harbor now and three days into the future,” said Bullington, who is now a doctoral student at Stanford University. “The next steps are to make these predictions accessible and communicate the risk of infection, both for short-term use and adaptation to the impacts of climate change.”

Because V. vulnificus abundance was higher when temperatures were warmer, and climate change is predicted to increase water temperature in the Ala Wai Canal, the researchers anticipate V. vulnifucus is likely to increase substantially in the canal in the coming decades.

By combining climate change projections of rainfall and air temperature with their computer model of bacteria dynamics, the team found that average V. vulnificus abundance in the canal may increase twice or three times current levels by the end of the century. Armed with this information, communities can make decisions on how to adapt to the changing conditions.

“Ultimately, we wanted to generate something that would be useful for people,” said Bullington. “This project is a great example of one of the many ways in which our departmental expertise can be of service for our local community and coastal management.”