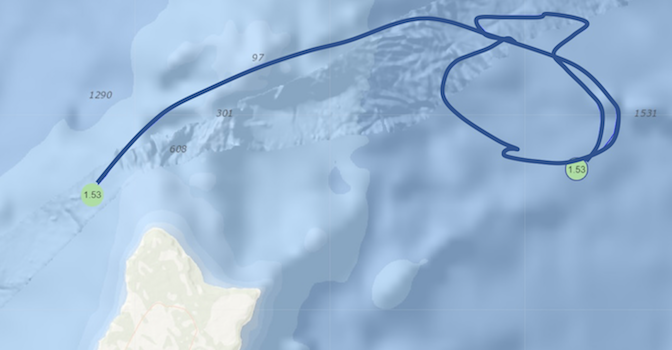 The Ritidian wave buoy, approx. 3.5 miles off Guam’s northern coast (moored in a depth of 515m), recorded 22 feet in significant wave height and a maximum wave height of 36ft — a record in the buoy’s 6-year history. The buoy was held under water for extended periods of time during the chaotic sea state and later broke free from its mooring. A few days after the storm, ocean conditions allowed for a safe recovery of the buoy, which –thanks to a local eddy– spun in a circle and came back relatively close to shore, as shown on image above.

Typhoon Mangkhut continued its destructive path, intensified, and made landfall as a Category 5-equivalent with one-minute sustained winds of 270 km/h (165 mph) in the Philippines, making it the strongest nationwide storm since Typhoon Haiyan in 2013. The typhoon subsequently made landfall in China. Tropical cyclones with maximum sustained wind speed of 74 miles per hour (or greater) are called typhoons in the Western North Pacific, hurricanes in the central and eastern North Pacific, and tropical cyclones in the South Pacific.

Meanwhile, Tropical Storm Olivia made landfall on the islands of Maui and Lānaʻi in Hawaiʻi. The storm resulted in wind, heavy rainfall, and extreme ocean conditions, specifically in Maui County. The Pauwela wave buoy, located approximately 9 miles off Maui’s North Shore (moored in a depth of 200m), recorded up to 17ft of significant wave height.