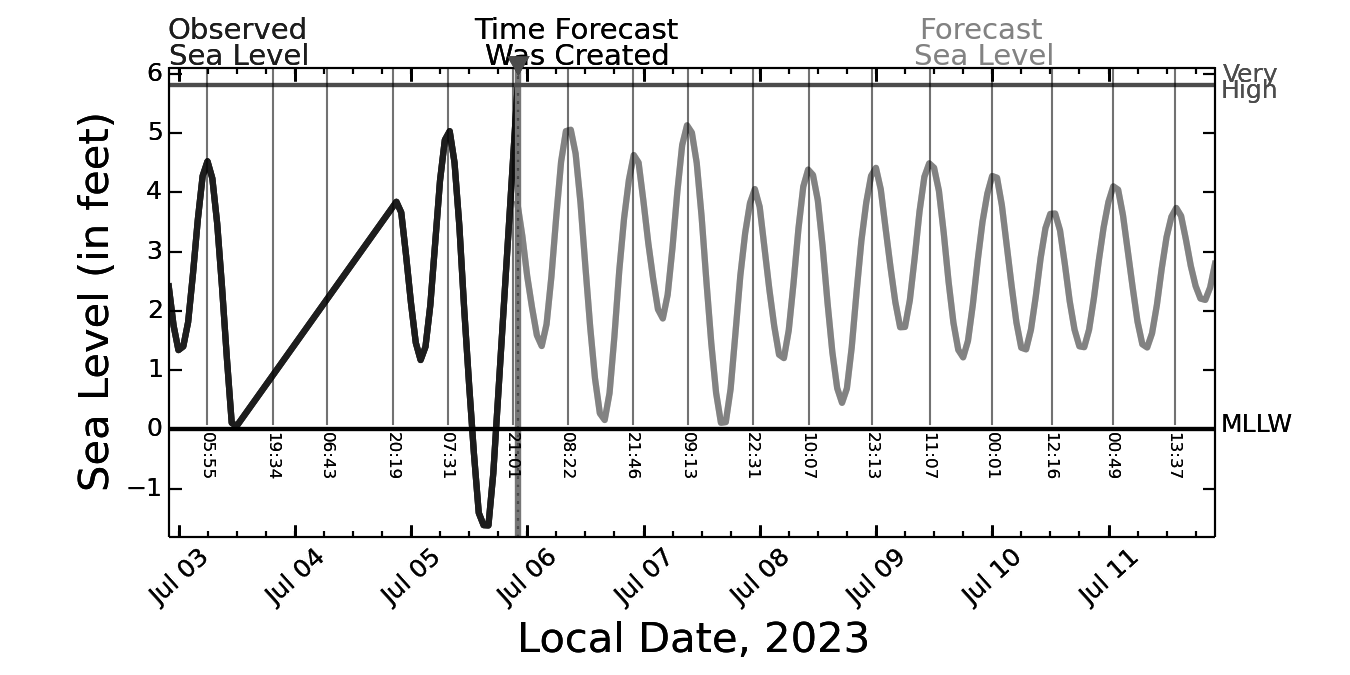 The Dark Blue Curve displays the Observed Sea Level at Malakal for the previous 3 days. The measurement is relative to Mean Lower Low Water (MLLW, a typical NOAA datum).

The Cyan Curve displays the Forecast Sea Level at Malakal for the next 6 days. The forecast is also relative to MLLW, and includes tides plus multi-day sea level variations.

The Red Line indicates the sea level height (5.8 ft) that is exceeded by 2 percent of the observed daily Higher High Waters (HHW) based on a 19-year historical record (excluding tsunamis). 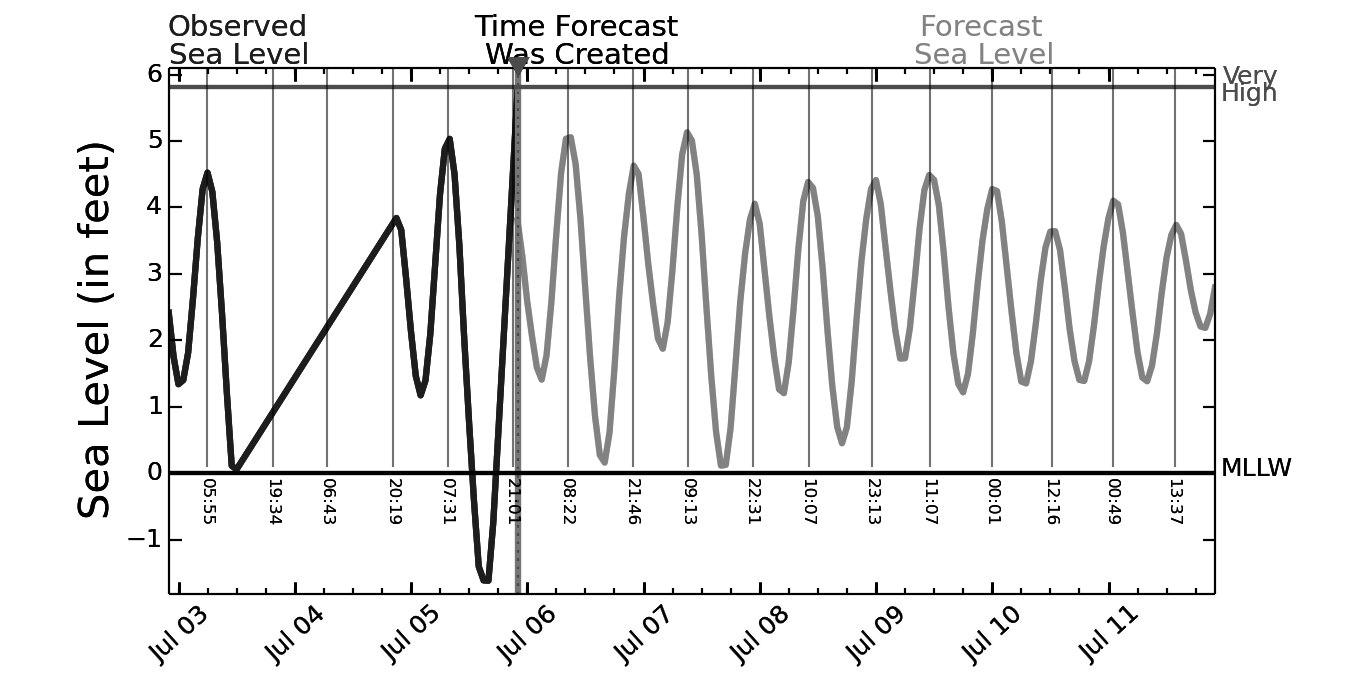 The Dark Blue Curve shows the Observed Sea Level (SL), in feet, at Malakal for the 3 days (in hourly increments) prior to the time this plot was created (indicated by the orange yellow vertical dotted line). The Observed Sea Level is measured relative to Mean Lower Low Water (MLLW, a typical NOAA datum).

The Cyan Curve shows the Forecast Sea Level (SL), in feet, at Malakal for the next 6 days (in hourly increments). The forecast is also made relative to MLLW and is updated every 4 hours.

The Red Line indicates a high sea level value of 5.8 ft relative to MLLW that is calculated as follows. First, tsunami signals were edited out of the Observed Sea Level for the 16-year period 1996-2011. Then, the linear trend of the 16-year record was estimated and subtracted. The Higher High Water (HHW) value for each day was extracted. The sea level height that was exceeded by only 2% of these HHWs was determined. This 2% exceedance value was added to the mean sea level based on the 2010-2011 period of data to yield the 5.8 ft sea level value plotted as the red line in the top plot. 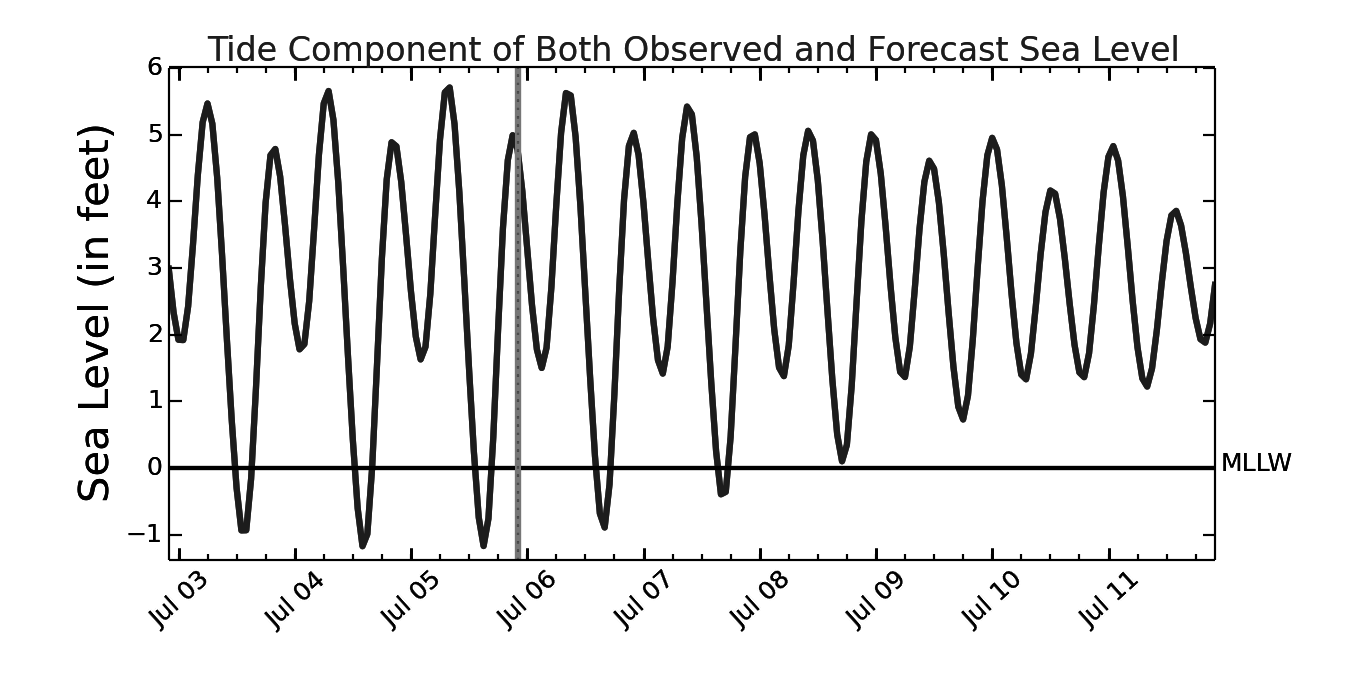 The Filled Black Curve in this plot shows the Non-Tidal components of both the Observed Sea Level and Forecast Sea Level. In general, Sea Level variations are dominated by the tides. However, there can be significant Sea Level height changes (occasionally, up to 1 foot or more) due to either persistent winds, strong offshore currents (eddies), surface wave-driven setup, or, of course, tsunamis which are forecast at the Pacific Tsunami Warning Center. A recent example of high (about 3/4 foot), slowly varying, non-tidal sea level can be found here.