PacIOOS Voyager is featured on the following two poster presentations during this week’s Ocean Sciences Meeting at the Honolulu Convention Center. Stop by and say aloha! We’d love to talk story and hear your feedback. Please also visit us at the IOOS Exhibitor Booth while you’re here. 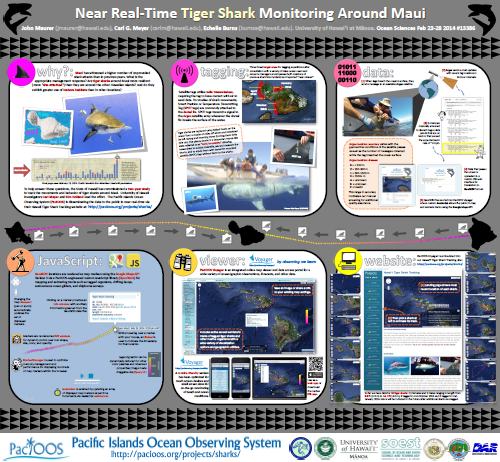 Maui has witnessed a higher number of unprovoked shark attacks than in previous years, and local spear fishers report increasing boldness of large sharks encountered in Maui waters. In order to select appropriate management responses to these events, tiger sharks were fitted with dorsal-fin mounted satellite transmitters to monitor their movements. This information will help determine whether sharks around Maui are more resident (more “site-attached”) than they are around the other Hawaiian Islands and whether they exhibit greater use of inshore habitats than in other locations. The tracks of these tagged tiger sharks will be available online via the Pacific Islands Ocean Observing System (PacIOOS) Voyager (http://pacioos.org/projects/sharks/), where the public can monitor shark locations in near real-time in both desktop and mobile-friendly map interfaces. Because satellite-based geolocation varies in positional accuracy, locations are quality-checked before posting online. This presentation will provide an overview of the data flow and methodologies employed, from initial tag deployment to online visualization. 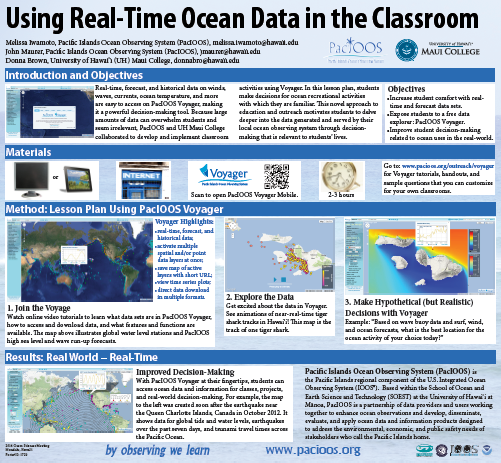 Real-time and forecast data on winds, waves, currents, ocean temperature, and much more are easily accessible on the Pacific Islands Ocean Observing System (PacIOOS) data visualization tool: PacIOOS Voyager. Ocean users can query and download data directly from the map interface. Combined with knowledge of ocean systems and processes, Voyager is a powerful tool for decision-making at all levels, from determining optimal ship routes to choosing the best type of surf board to take out in today’s swell. PacIOOS and UH Maui College collaboratively developed and implemented classroom activities using Voyager and the data therein for students to make a suite of decisions based on activities they know about first-hand paired with information they learn in Introduction to Oceanography. This novel approach to education and outreach aims to motivate students to delve deeper into the data generated and provided by their local ocean observing system through decision-making that is relevant to students lives. This presentation will provide a brief introduction to the PacIOOS Voyager, an overview of the classroom activities developed, and a summary of results and lessons learned from student engagement.