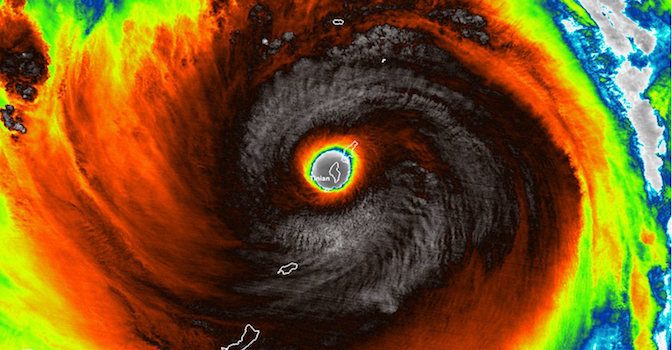 With sustained winds of 178 mph, Super Typhoon Yutu is the strongest storm to ever hit a U.S. territory. Tinian in the Commonwealth of the Northern Mariana Islands (CNMI) was hit directly on October 25 by Super Typhoon Yutu, causing devastating destruction to homes and infrastructure on all Mariana Islands. A super typhoon has 10-minute sustained winds of at least 130mph, which is the equivalent of a strong category 4 hurricane or greater.

PacIOOS wave buoy off Tanapag, Saipan, measured 20-25ft of significant wave height before it broke free from its mooring. While adrift, the buoy continued to collect valuable wave and temperature information, with a continuous significant wave height of 20-25ft for about 12 hours. The biggest individual wave measured by the wave buoy during the storm was 45ft, peak-to-trough.