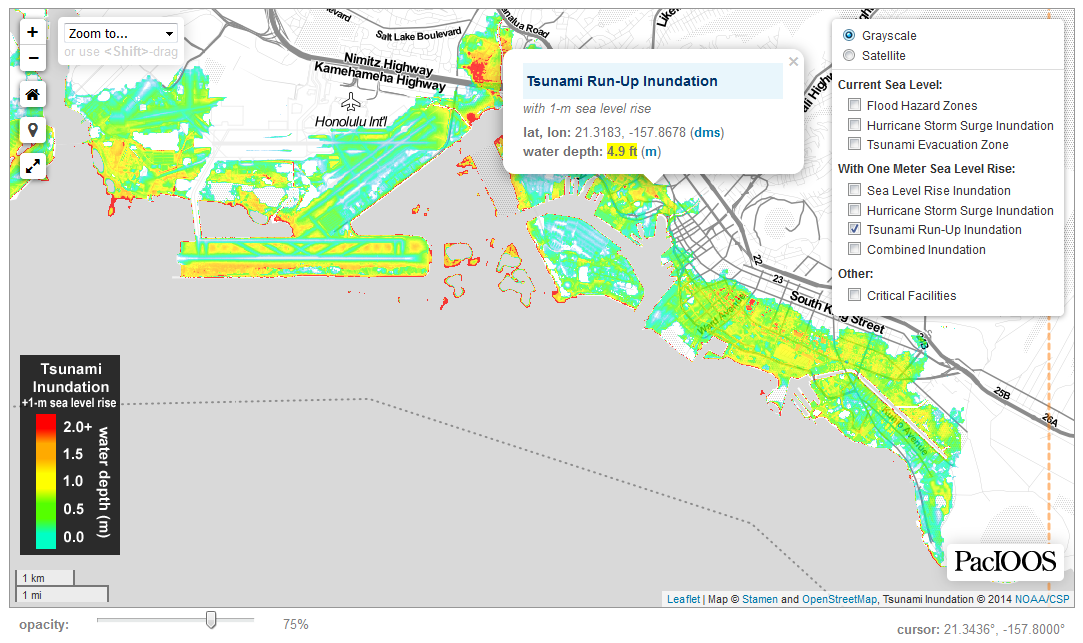 Among the impacts associated with climate change is the threat of rising sea levels. Recent projections of global sea level rise (SLR) estimate an increase of up to 1 meter or higher above current sea levels. This is of particular concern to low-lying coastal communities and ecosystems that are exposed to a variety of coastal hazards, such as tsunamis and hurricanes. These hazards and the resulting risk to coastal areas can be exacerbated by SLR. A thorough risk and vulnerability assessment includes the mapping of inundation and an analysis of social and economic impacts as a result of SLR and associated coastal hazards.

This project aims to fulfill the need for Hawaiʻi-specific information regarding the impacts of SLR on coastal areas within the State. Because of its high density, large population, major infrastructure, and high economic activity, the project focuses on the urban corridor of Honolulu, as it represents the majority of the State’s commercial and industrial sectors. This area of focus extends from Diamond Head to Pearl Harbor in Honolulu, Hawaiʻi. The objective of the research is to identify the change in exposure and risk to coastal inundation hazards such as hurricanes, tsunamis, and storm inundation as a result of SLR. Through targeted outreach, the results of this research will play a critical role as a decision-support tool in facilitating science-based planning and policy. This is especially relevant as the State develops comprehensive climate change and SLR adaptation strategies, for which this project can serve as a crucial initial step. It is expected that the approach taken in this project can serve as a roadmap for assessing the impacts of SLR and coastal hazards in other parts of the State.

This project demonstrates that SLR will significantly increase the impacts of coastal hazards in Honolulu’s urban corridor, the most populated and economically active area in the State of Hawaiʻi. The analysis indicates that 80% of the study area’s economy, nearly half of the population, and much of the infrastructure and land are at risk of inundation. It is clear then that there is a need to develop long-term, risk-based strategies for hazard mitigation, as well as adaptation of systems to reduce the potential for harm. Through targeted outreach and the provision of resulting data to local planners and decision-makers, the results of this project can help inform successful adaptation and hazard mitigation planning. The methods employed in this project can also be translated to other coastal communities in Hawaiʻi, as a comprehensive SLR adaptation strategy is developed for the State.

Through an analysis of the exposure to coastal hazards and SLR, this study identifies areas of high risk for targeting further work related to preparedness, response, recovery, and mitigation. Opportunities for future research include more statistical analysis and modeling of the risks associated with multiple hazards, as well as the development of flood loss estimate models. While flooding exposure analysis provides a good indication of possible risks to the community, estimating probable losses would be necessary for mitigation and adaptation planning. Other opportunities for research include the analysis and development of site-specific adaptation measures. In clearly identifying the challenge that must be addressed, it is anticipated that this project will serve as the basis and impetus for these and other research and planning initiatives.

DISCLAIMER: These data are experimental and derived from state of the art computer models. They are provided as an initial hazard screening tool and are not intended to supercede existing regulatory mapping tools or be used for regulatory or permitting purposes. Hurricane and tsunami inundation maps provided here differ from the current flood hazard and tsunami evacuation zones due to the probabilistic methodology of modeling and the broader time period of the given events. These data do not consider future changes in coastal geomorphology and natural processes such as erosion, subsidence, or future construction. These data do not specify timing of inundation depths and are not appropriate for conducting detailed spatial analysis. The entire risk associated with the results and performance of these data is assumed by the user. 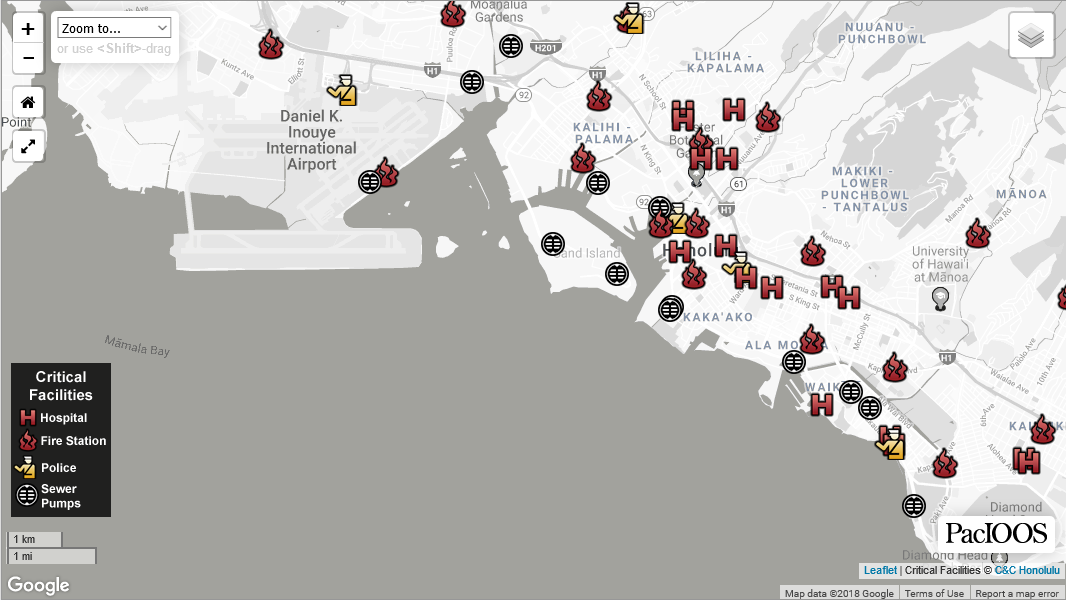 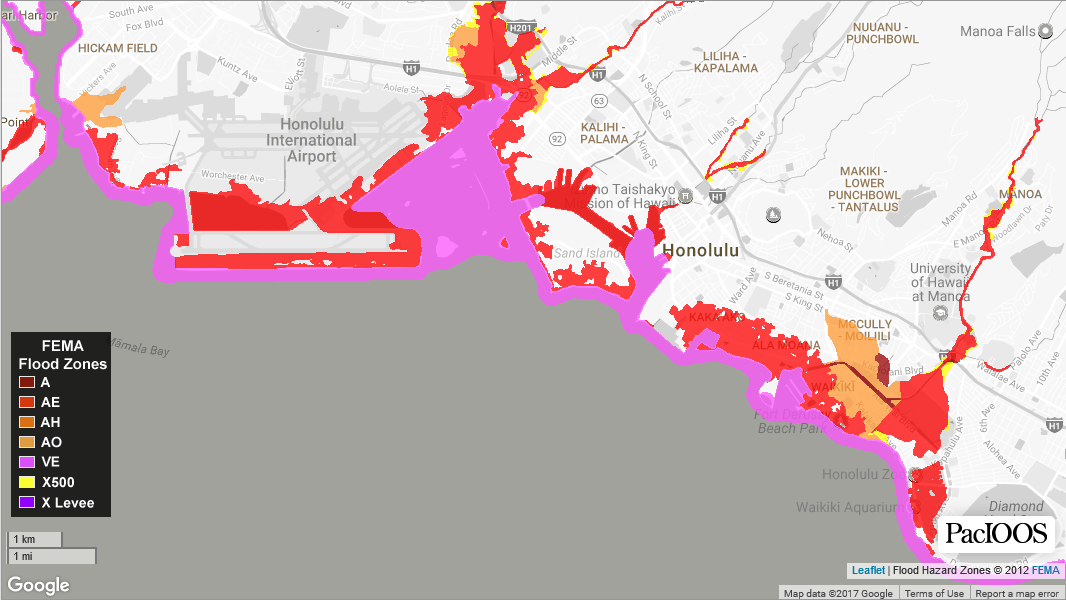 Credit: FEMA and State of Hawaiʻi

Flood hazard zones for the State of Hawaiʻi established by the U.S. Federal Emergency Management Agency (FEMA) Digital Flood Insurance Rate Map (DFIRM). Areas that fall within the 100-year flood boundary (a.k.a., base flood or floodplain) are called Special Flood Hazard Areas (SFHA) and are divided into insurance risk zones A, AE, AH, AO, or VE. The term 100-year flood indicates that the area has a 1% chance of flooding in any given year. Zones X500 and X Levee are Non-Special Flood Hazard Areas (NSFHA) and have moderate-to-low flood risk.

Zone A is the flood insurance rate zone that corresponds to the 100-year floodplains that are determined in the Flood Insurance Studies (FIS) by approximate methods.

Zone AE is the flood insurance rate zone that corresponds to the 100-year floodplains that are determined in the Flood Insurance Studies (FIS) by detailed methods.

Zone AH is the flood insurance rate zone that corresponds to the areas of 100-year shallow flooding (usually areas of ponding) where average depths are between 1 and 3 feet.

Zone AO is the flood insurance rate zone that corresponds to the areas of 100-year shallow flooding (usually sheet flow on sloping terrain) where average depths are between 1 and 3 feet.

Zone VE is the flood insurance rate zone that corresponds to the 100-year coastal floodplains that have additional hazards associated with storm waves as determined in the Flood Insurance Studies (FIS) by detailed methods.

Zone X Protected by Levee is the flood insurance rate zone that corresponds to areas protected from the 1%-annual-chance or greater flood hazard by a levee system that has not been provisionally accredited. Overtopping or failure of any levee system is possible. 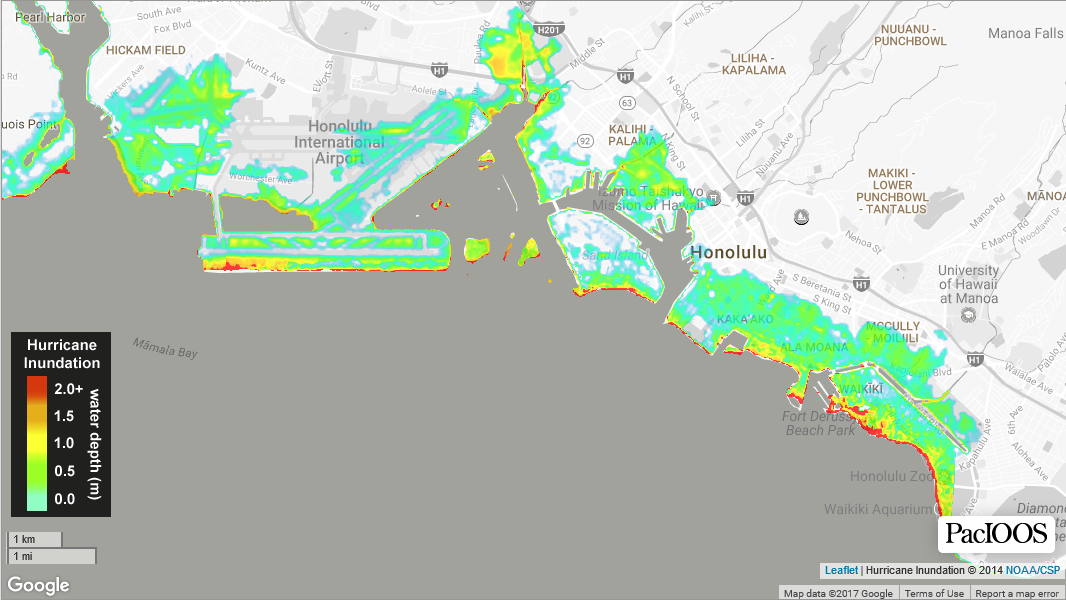 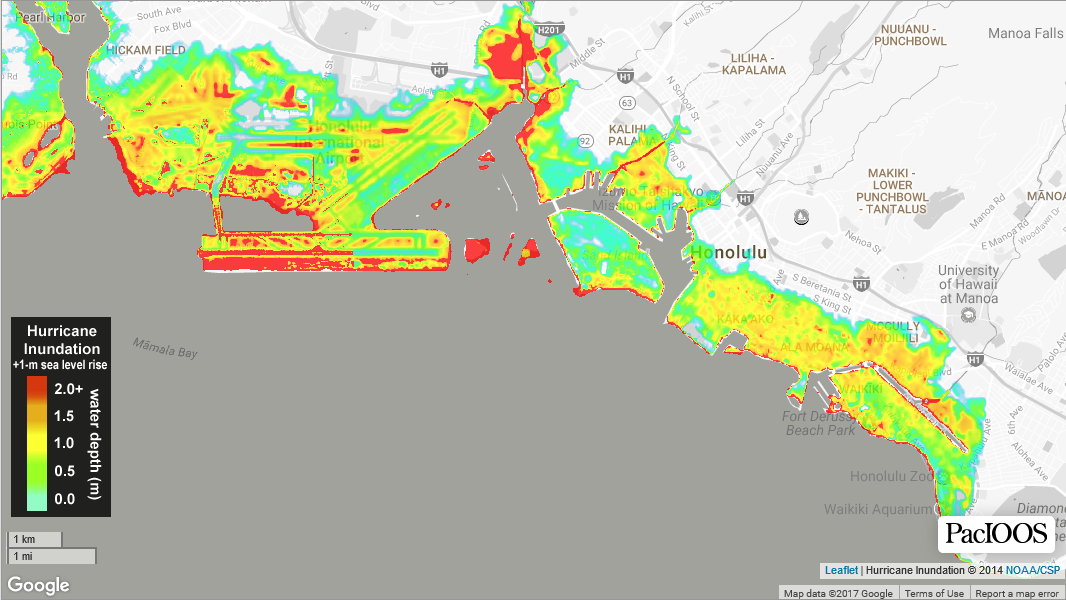 Computer model simulations of hurricane storm surge inundation around Honolulu using either current sea level or 1 meter of sea level rise as its baseline water level. The model simulates a Category 4 hurricane, similar to Hurricane Iniki, which devastated the island of Kauaʻi in 1992, with a central pressure ranging from 910 to 970 mbar and maximum sustained winds ranging from 90 to 150 mph as it tracked from open ocean to land to open ocean again. The model result shows the Maximum of the Maximum Envelope of High Water (MEOW), or MOM, providing a worst-case snapshot for a particular storm category under “perfect” storm conditions.

With one meter sea level rise: 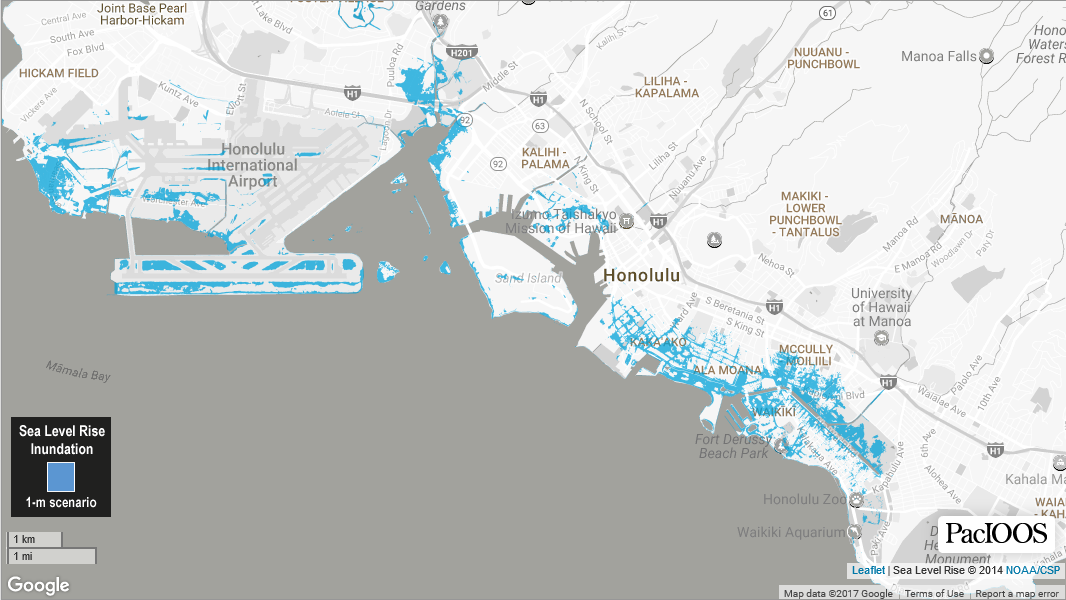 This map shows coastal flooding around Honolulu due to 1 meter of sea level rise. This scenario was derived using a National Geospatial Agency (NGA)-provided digital elevation model (DEM) based on LiDAR data of the Honolulu area collected in 2009. This “bare earth” DEM (vegetation and structures removed) was used to represent the current topography of the study area above zero elevation. The accuracy of the DEM was validated using a selection of 16 Tidal Benchmarks located within the study area. The single value tidal water surface of mean higher high water (MHHW) modeled at the Honolulu tide gauge was used to represent sea level for the purposes of this study. Water levels are shown as they would appear during the highest high tides (excluding wind-driven tides). 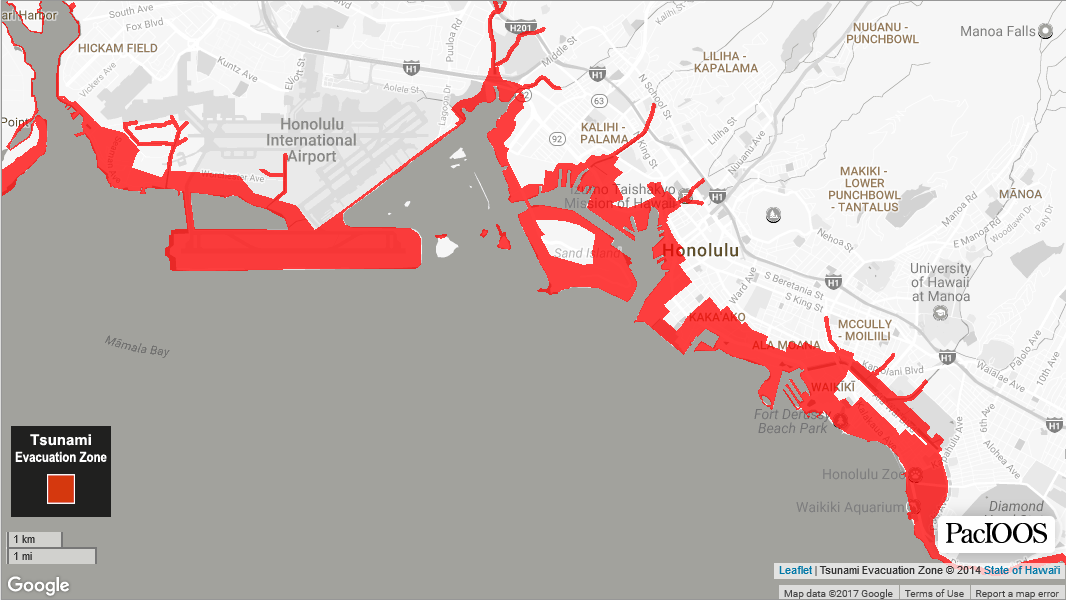 Credit: City & County of Honolulu and State of Hawaiʻi

The current tsunami evacuation zone for the State of Hawaiʻi. Merged from multiple data sources and provided by the Hawaiʻi Statewide GIS Program. The evacuation zone is a guideline and should be considered the minimum safe evacuation distance in the event of a tsunami or significant earthquake. 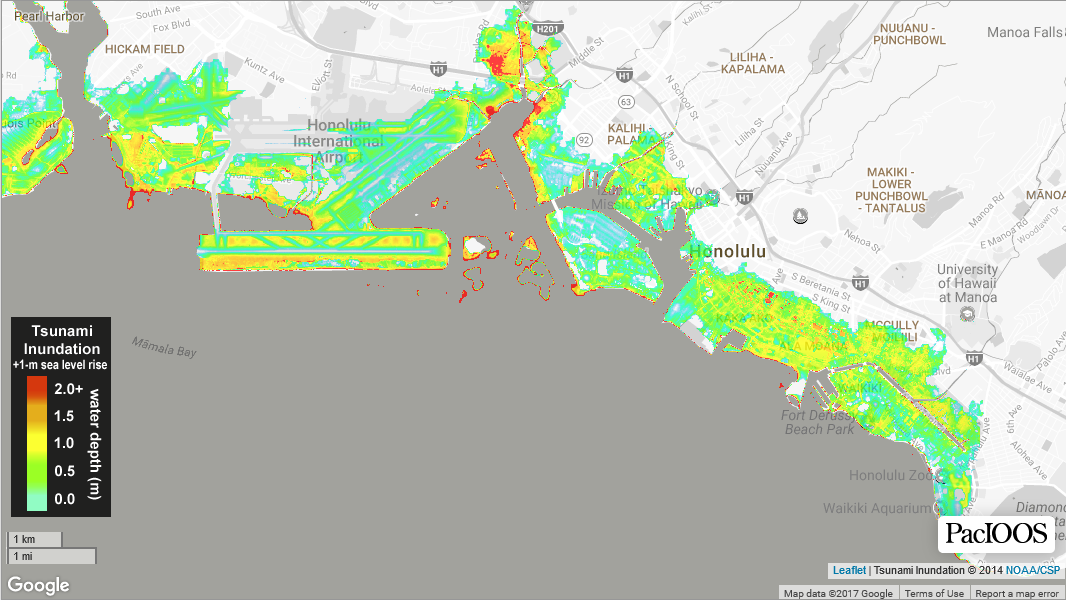 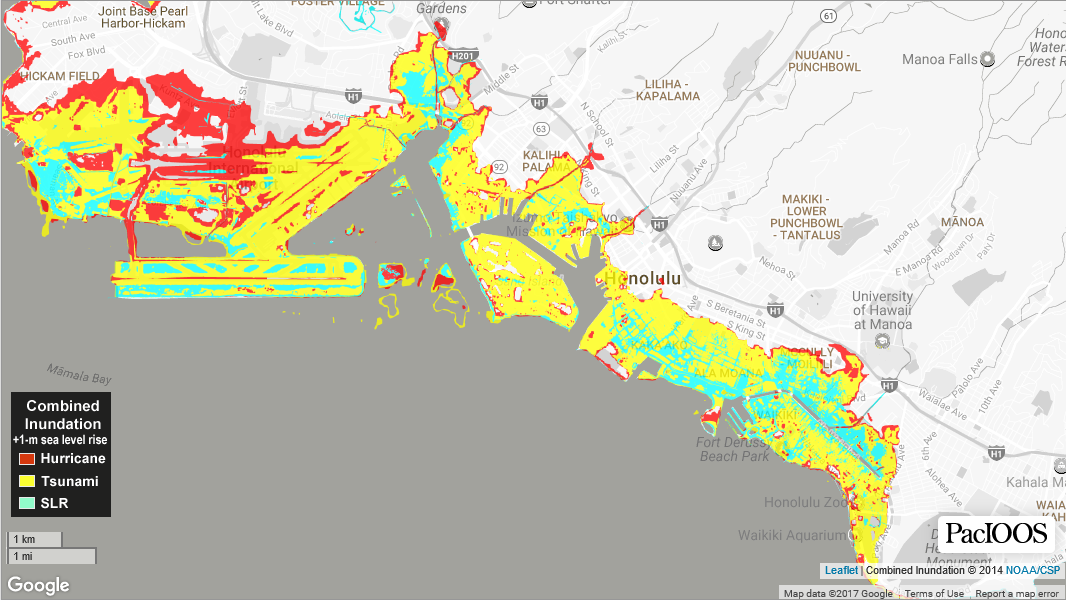 This map combines data from the above sea level rise inundation layers into a single multi-hazard view. This allows users to compare the predicted flooding extent from sea level rise alone with that exacerbated by the addition of tsunami and hurricane events.