Locations on the Earth can be expressed as a pair of latitude and longitude coordinates, with latitudes ranging from 0° at the equator out to ±90° at the poles and longitudes ranging from 0° at the prime meridian that runs through London out to ±180° at the antimeridian in the Pacific Ocean. The format for expressing these values varies across different applications, with some people and communities preferring one format over the others. As a brief summary, here is the same location (Honolulu) expressed in each of three different ways: 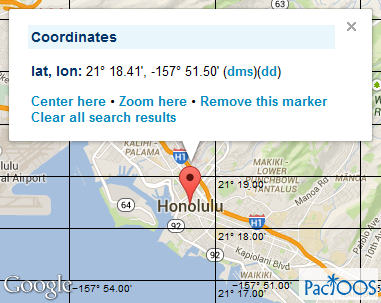 Taking the above example one step further, the fractional portion of decimal minutes are represened as the number of “seconds” between 0 and 60. In our example, 0.42′ times 60 gives us 25 seconds, while 0.50′ times 60 gives us 30 seconds.

We received feedback from several users that the degrees minutes format was preferred, though not offered yet in Voyager. In response to this request, we have added this additional coordinate format and made it the new default. As always, users can still change their preferred format using either the “change units” link towards the lower, left-hand corner of the Voyager interface or by toggling between the various formats (labeled “dd”, “dm”, and “dms”, respectively) in the pop-up window that appears when clicking on certain overlays.