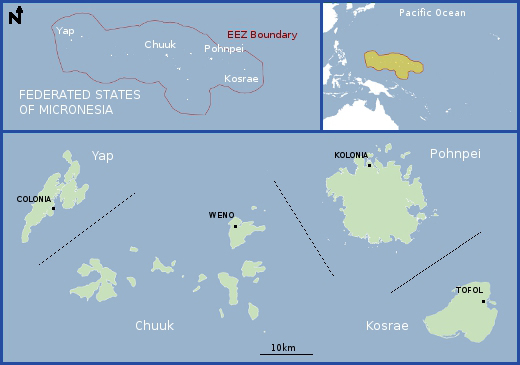 The earliest settlement of greater Micronesia is thought to have occurred about 2,000 years ago on the western mountainous islands, with immigrants arriving from the south. Yap may possibly have been settled even earlier, its language suggesting settlers from more varied areas, possibly from the west as well. In 1525, Portuguese explorers encountered Yap and Ulithi Islands during their search for the Spice Islands (Indonesia). Spanish expedi­tions later made the first European contact with the rest of what came to be known as the Caroline Islands. Spain claimed sovereignty over the Caroline Islands from 1886 to 1899. When Spain withdrew from its Pacific insular areas, they were sold to Germany, except for Guam, which became a U.S. insular area. Germany administered the islands from 1899 to 1914, when Japanese naval squadrons took military possession of the Marshall, Caroline, and Northern Mariana Islands. Japan began its formal adminis­tration by a League of Nations mandate in 1920.

The U.N. created the Trust Territory of the Pacific Islands (TTPI) in 1947. The Federated States of Microne­sia (FSM), along with Palau, the Republic of the Marshall Islands (RMI), and the Commonwealth of the Northern Mariana Islands (CNMI) together constituted the TTPI. The TTPI came under United States Department of the Interior administration in 1951. The U.S. President appointed a High Commissioner to admin­ister the Trust Territory, who in turn appointed a district administrator for each of the FSM States until 1979. In that year, the United States recognized the FSM constitution and the establishment of the Government of the FSM at both national and state levels. FSM became an independent nation in November 1986, at which time the Compact of Free Association with the United States was established. The Kosrae, Pohnpei (formerly Ponape), Chuuk (formerly Truk), and Yap island groups now make up the four states of the FSM.

The major islands of each state are the erosional rem­nants of long inactive volcanoes, now partially submerged. The degree of submergence has determined in part the type of reef surrounding the islands. Kosrae has a fringing reef with no inner lagoon. The Chuuk group of islands sits atop a submerged shield volcano, with a triangular lagoon approximately 55 kilometers on a side. Within the lagoon are numerous coral and volcanic islands, the latter rising as much as 442 meters above sea level, some with fringing reefs. The coral islands within the lagoon and at the margins of the lagoon rise only about one meter above sea level. The Yap islands consist of an elongate, approximately 24-kilo­meter-long, partially submerged and eroded volcanic edifice, encompassed by a fringing- to barrier-reef and lagoon com­plex. Pohnpei is a high volcanic island that hosts the highest peaks in the FSM: Totolom (Dolohmwar) at 791 meters and Mt. Nahna Laud at 798 meters.

Gold mineralization occurs in epithermal quartz veins and breccia and in hydrothermal iron oxide/silica rocks on Maap (also spelled Map) and on the Gagil-Tamil Islands in the Yap island group. Gold grades up to about 4 grams per ton have been determined. About 4,000 metric tonnes of copper ore, averaging 5.2 percent copper, was mined near Onean and Gatjapar on Gagil-Tomil Island and at Talangith on Maap Island during Japanese occupation. During that time, 12,700 metric tonnes of nickel-rich laterite, averaging 0.7 percent nickel and 44 percent iron, was mined from an open pit at Gatjapar.

The FSM EEZ can be divided into two broad geologic provinces. The first is a complex array of ancient volcanoes and ridges that makeup the 2,500-kilometer-long Caroline Ridge. The second is a volcanic-arc-subduction zone system comprising the Yap Trench, Yap Arc, Philippine Sea back-arc area, and the southern margin of the Mariana arc-trench system. In addition, among these topographic high areas and at the margins of the EEZ occur regions of sediment-covered abyssal plain.

The Caroline Ridge can be further divided into eastern, central, and western sections that have distinct geologic char­acteristics. The eastern third of the ridge extends from Kosrae Island to Chuuk Atoll and trends northwestward. This seg­ment consists of isolated atolls and seamounts and represents the trace of a hot spot that was active between 12 million and 1 million years ago. The central segment extends westward from Chuuk Atoll to Ifalik Atoll-Tarang Bank. This segment consists of large carbonate banks and atolls and is generally of water depths less than 2,500 meters. The western third of Caroline Ridge extends from Ifalik Atoll to the Yap trench and trends northwestward. This segment consists of a large shallow-water (<2,500 meters) ridge bounded by, and cut by, narrow troughs that represent strike-slip faults (southern margin), normal faults (northern margin), and small spread­ing basins. Both the north and south flanks are block faulted. The origin of the western two-thirds of Caroline Ridge is not certain. That region has been variously interpreted as a relict island arc, a leaky transform fault combined with a hot-spot trace, and an extinct spreading ridge/transform fault system. The central and western parts of the ridge are about 28 to 24 million years old.

The Yap Arc and Trench represent an Oligocene through Neogene (34-1.8 million years old) subduction margin, but one that is distinct in many ways from other west and southwest Pacific arcs, such as the Mariana Arc. For example, the dis­tance between the arc summit and trench axis is very small and subduction may have ended in the late Miocene. Also, many of the rocks recovered from the arc (inner trench wall, summit, and summit islands) are metamorphic rocks. Many of the vol­canic rocks have a compositional signature of oceanic crust and thus may be obducted oceanic crust. Rocks dredged from the outer trench slope have a mid-ocean ridge basalt (MORB)-like composition and are about 7 million years old. Other rocks are more typical of volcanic arcs. It has been suggested that subduction ended in the late Miocene and that back-arc basin crust was obducted onto the volcanic arc. However, these sug­gestions are difficult to reconcile with the occurrence of hydro­thermal mineralization of Quaternary (<1.8 million years old) sandstone at the summit of the Yap Arc.