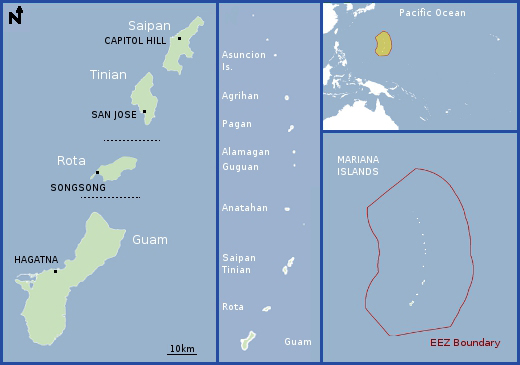 The Mariana Islands may have been first visited by people from Southeast Asia more than 3,500 years ago. The inhabitants became known as Chamorro, which included descendants of the original immigrants and also those who immigrated from the Caroline Islands after trade had been established between the two island groups. In 1521, Ferdinand Magellan was the first European to visit the islands, specifically Guam and Rota. Spain claimed the islands, including Guam, in 1565 and maintained control over them for more than 300 years. However, the first permanent Spanish community was not established for about 100 years after the islands were appropriated.

The CNMI comprises 14 islands that delineate a 483-kilometer-long archipelago. This archipelago sits atop the Mariana Ridge, which is about 1,200 kilometers long within the CNMI EEZ. Many seamounts occur on the ridge between the islands. The southern islands are raised limestone platforms that rest on a volcanic edifice, whereas the northern islands are entirely volcanic. Six islands have been volcanically active during historic times—Pagan, Agrihan, Asuncion, Farallón de Pájaros, Guguan, and Anatahan. In addition, at least 12 seamounts along the chain are volcanically or hydrothermally active. The islands of Saipan, Tinian, and Rota, located northeast of Guam, share the same geologic history with Guam. The CNMI EEZ shares its southern boundary with that of Guam and its northern boundary with that of the Japanese Izu-Bonin Arc. The Izu-Bonin volcanic arc is geologically a continuation of the Mariana Arc.

The Mariana volcanic arc (also called volcanic ridge or island arc) is part of a subduction system in which the Pacific Plate plunges beneath the Philippine Sea Plate and into the Earth’s mantle along the Mariana Trench. The volcanic chain of seamounts and islands is located about 200 kilometers west of the trench axis. The Mariana Arc started to develop about 40 million years ago, and volcanic activity has occurred at various places along the arc since that time.

West of the Guam-Mariana Arc is the mostly sediment-covered floor of the Philippine Sea (a back-arc basin), with numerous seamounts, ridges, and basins that are less than 20 million years old. The basins and ridges consist of: (1) the Mariana Trough, an active back-arc spreading center located immediately west of the Mariana Arc; (2) the West Mariana Ridge, a remnant (extinct) volcanic arc; and (3) the Parece Vela Basin abyssal plain.

The Mariana Trench is partly filled by sediment. Many serpentine diapirs and mud volcanoes occur in the region between the trench axis and the volcanic arc. East of the trench is the sediment-covered Pacific Ocean abyssal plain. At least ten large Cretaceous (>65 million years old) seamounts protrude through the abyssal plain sediment within the CNMI EEZ. These seamounts were constructed on the oldest part of the Pacific Ocean crust, which is Jurassic in age (>142 million years old).

In summary, the CNMI EEZ encompasses a variety of geologic, morphologic, and tectonic environments. These include, from east to west, (1) Cretaceous-age seamounts on the Pacific Plate abyssal plain, which includes the Magellan Seamount Province, (2) deep Mariana Trench, (3) volcanically active Mariana Arc upon which the islands of the CNMI are located, (4) Mariana Trough, a back-arc basin spreading center, (5) West Mariana Ridge, a remnant arc, and (6) Parece Vela Basin, an abandoned Tertiary back-arc basin.