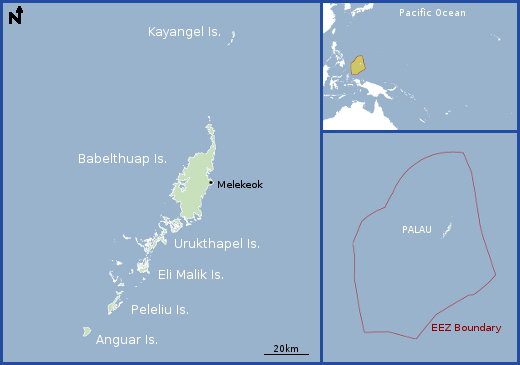 Like the rest of Micronesia, Palau (or Belau) was first occupied between 1,000 and 2,000 B.C. by immigrants from the south­west Pacific—Indonesia, Melanesia, and perhaps Polynesia. The first western contact was a rather inauspicious occasion in l783, when the explorer Captain Henry Wilson of England, aboard the vessel Antelope, ran aground on one of the rock islands located between Oreor (formerly Koror) and Beliliou (formerly Peleliu) Islands. The crew spent several months on the islands rebuilding the ship. The British dominated trade with Palau until 1885, at which time Spain took control of the islands. Spain maintained control until 1899, at which time Palau and the rest of the Caroline and Northern Mari­ana Islands were sold to Germany, following the defeat of Spain in the Spanish-American War. Germany administered the islands from 1899 to 1914 and developed their natural resources by conscripting native laborers. These laborers mined phosphate on Ngeaur Island (formerly Angaur) and developed coconut plantations.

Japanese forces occupied Palau in 1914 by a mandate from the League of Nations, which recognized the Emperor of Japan as the authority in Micronesia. The Japanese increased development of mining, agriculture, and com­mercial fishing. They changed the economy from one of subsistence to a market economy. The population swelled to over 40,000, with less than 25 percent being Palauans. Palau became a closed military region in 1938, and campaigns during World War II took place throughout the islands, with major battles on Beliliou, Ngeaur, and Oreor.

The United Nations (U.N.) created the Trust Territory of the Pacific Islands (TTPI) in 1947 and named the United States the administrative authority. Palau was the last TTPI district to reach independence. In the late 1970s, the United States installed a considerable capital improvement program (CIP) with the goal of building major infrastructure projects (airport, dock, roads, and water, power, and sewer systems) in each of the TTPI district centers. Independence from the U.S.-administered U.N. Trusteeship and initiation of the Compact of Free Association with the United States were entered into on 1 October 1994. U.S. and Palau officials had initially signed the compact eight years before that date, on 10 January 1986. It was officially enacted on 14 November 1986. Palau became the 185th member of the U.N. on 15 December 1994.

There are about 300 islands in Palau, and nine of them are permanently inhabited. The archipelago extends for about 240 kilometers, but the length of the Palau volcanic arc is about 350 kilometers. The Palau Islands represent the exposed summit of an arcuate submarine ridge, the Palau Ridge (Palau volcanic arc), which is the southernmost arc in a series of arc-trench systems that include the Yap, Mariana, and Izu-Bonin systems to the north. The largest island is Babeldaob (Babelth­uap), most of which has been inaccessible until recently. A ring road is presently being built around Babeldaob.

The Palau group of islands is encircled by a part-bar­rier part-fringing reef, except for the northernmost islands, Ngcheangel (formerly Kayangel), and the southernmost island, Ngeaur. The Ngcheangel Islands constitute an atoll, and Ngeaur Island is an uplifted coral platform with a maxi­mum elevation of 56 meters. The atoll surrounded by the barrier reef extends south and west of Babeldaob Island. It encloses many smaller islands, which themselves have fringing reefs. The highest elevation in Palau, 287 meters above sea level, is on Babeldaob.

The Palau volcanic arc, of which the Palau Islands are the subaerial expression, began formation just under 40 mil­lion years ago. It remained volcanically active until about 20 million years ago, at which time subduction of the Pacific Plate under the Philippine Plate ceased in that region, though it continued further northeast along the Yap and Mariana arcs. It is likely that subduction is currently occurring only at a very slow rate along the Yap Trench, but it is very active along the Mariana Trench. The Palau Arc is now part of the Palau-Kyushu Ridge, which is an extinct volcanic arc (rem­nant arc), located for the most part in the Philippine Sea back-arc basin.

The oldest rocks exposed on the Palau Islands are of volcanic origin and are related to subduction and arc forma­tion. Those rocks are overlain in places by carbonate reef limestones of Pliocene through Holocene ages (less than 5 million years old). Similar rocks largely make up the uplifted carbonate platform islands of Beliliou and Ngeaur. Bauxite (aluminum ore) was mined on Babeldaob Island from two (Ngardmau, Ngeremlengui) of the dozens of prospects identi­fied there. Mining ceased during World War II after a total of 369,227 metric tones, averaging 52 percent aluminum oxide (Al2O3), was produced between 1938 and 1944. About 2 mil­lion tonnes of proved reserves of 30 percent Al2O3 still exists, as well as much more lower grade ore. Phosphate was mined in Palau. At the Rois Malk epithermal gold deposit on southeast Babeldaob Island, volcanic rocks are overlain in fault contact by a sequence of poorly consolidated shale, shaly siltstone, and pebble conglomerate. Locally, these rocks are highly enriched in organic matter, constituting lignite (coal) deposits. The lignite was briefly mined during World War II along with interbedded layers of kaolinite (white clay) that was used for ceramics.