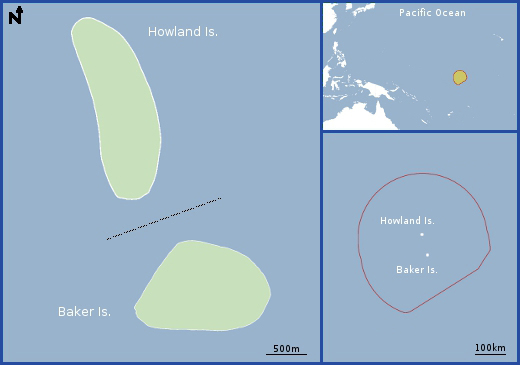 Captain George B. Worth on the U.S. whaling ship Oeno discovered these islands in 1822. They were visited subsequently in 1828 by Captain Daniel McKenzie of the U.S. whaler Minerva Smyth, in 1832 and 1839 by Michael Baker of the whaler Gideon Howland, and in 1842 by Captain George E. Netcher of the U.S. whaler Isabella. Alfred G. Benson and Charles H. Judd took formal possession of the islands (as well as Jarvis Island) in 1857 in the name of the American Guano Company of New York. Rich guano deposits were mined from 1850 to 1891 and in 1857 the United States claimed the islands on the basis of the Guano Act of August 18, 1856. The Guano Act stated that “when any citizen of the United States discovers a guano deposit on any island, rock, or key, not within the lawful jurisdiction of any other government, and takes peaceable possession thereof, and occupies the same island, rock, or key, it appertains to the United States.” In the later part of the 19th century, the guano industry gradually disappeared on Howland and Baker Islands. The islands were then barren outposts until the era of aviation began in the 1930s. The United States reasserted its claim to the islands in 1934. A few colonists occupied the islands in 1936, but they were removed following Japanese attacks on the islands in 1942. U.S. military person­nel occupied the islands during World War II. The islands have remained unoccupied since that time, but they are visited annu­ally by U.S. Fish and Wildlife personnel because the islands are a National Wildlife Refuge.

Howland Island played a role in the tragic disappearance of Amelia Earhart and Fred J. Noonan during their around-the-world flight in 1937. They left Lae, New Guinea, on July 2, 1937, headed for Howland Island, but were never seen again. Numerous speculations have been put forward as to their fate. The Amelia Earhart lighthouse on Howland Island was partly destroyed during World War II, but it was later rebuilt in her memory.

Howland and Baker Islands are composed of coral-reef platforms sitting atop Cretaceous (~120-75 million years old) volcanoes. The Howland-Baker EEZ contains about 10 other moderate-sized and many small Cretaceous seamounts that are either without coral reefs or capped by submerged reefs. At least one of the seamounts, Winslow Reef on the southeast boundary line of the EEZ, has a submerged coral-reef cap with the summit at about 1,500 m water depth. Otherwise, the sea-floor topography of the EEZ is dominated by a sediment-covered abyssal plain deeper than 5,000 m.