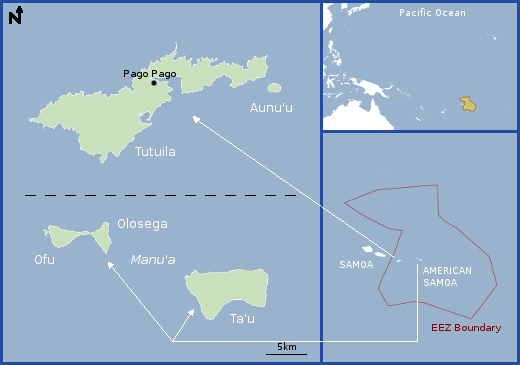 American Samoa was settled circa 600 B.C., perhaps by migrants from the west by way of Indonesia, Vanuatu, Fiji, and Tonga. European explorers first visited the islands in the 18th century, the initial visit being by the Dutch explorer Jacob Roggeveen in 1722. Claim disputes among Germany, the United Kingdom, and the United States were settled by the 1899 Treaty of Berlin, in which the United States received the smaller group of eastern islands (Tutuila and Aunuʻu), which it formally occupied the next year. The deed of ces­sion was signed on 17 April 1900, and the U.S. Navy took over administrative duties. Taʻu, Ofu, Olosega (the Manuʻa Islands), and Rose Island were ceded to the United States in 1904. Swains Island became part of American Samoa in 1925 by a joint resolution of Congress. In 1951, President Truman transferred administration of the islands to the Department of the Interior.

American Samoa is the southernmost U.S. territory, cen­tered at about 14°S latitude. It is located 3,700 kilometers southwest of Hawaiʻi and 2,574 kilometers northeast of New Zealand. Tutuila Island possesses an excellent natural deep-water harbor at Pago Pago, which rests at the base of Mt. Matafao, the second highest peak in the territory at 653 m. The highest peak is Lata Mountain at 966 m on Taʻu Island. Ofu, Olosega, and Taʻu Islands form the Manuʻa Islands group. Swains Island is an atoll without a channel connecting the central lagoon and the open ocean, whereas Rose Island is a typical atoll with free exchange of water between the lagoon and open ocean.

The EEZ of American Samoa encompasses a variety of geologic, morphologic, and tectonic environments. The sediment-covered, deep-water Samoa Basin occupies most of the eastern half of the EEZ. Seamounts of unknown age penetrate through the sediment in the Samoa Basin, mostly near the southern and northern margins of the EEZ. A small piece of the Manihiki Plateau, a feature about 110 million years old, occupies the northeast corner of the EEZ and includes several seamounts. The eastern end of Samoa Ridge occupies the west-central part of the EEZ. This ridge is composed of the geologically young (1.5 million years old to recent) volcanoes that form all the islands within the American Samoa EEZ, except Swains Island. Tutuila Island has a maximum age of about 1.5 million years, and Taʻu Island has had recent volcanic activity. The hot spot (stationary magma chamber deep in the Earth) that created the entire Samoa island chain and ridge (in both Samoa and American Samoa) lies about 45 kilometers east of Taʻu Island (part of the Manuʻa Islands) and its active sea-floor manifestation is called Vailuluʻu seamount. This seamount is both volcanically and hydrothermally active. Part of Robbie Ridge occupies the northwest corner of the EEZ and includes Swains Island and several seamounts. The age of Robbie Ridge may be similar to that of Manihiki Plateau. The southwest margin of the EEZ is sediment covered and abuts the outer (eastward) margin of the Tonga Trench.