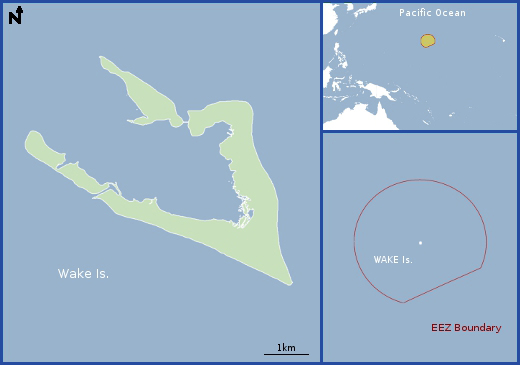 The great distances that separate Wake Atoll from the northern Marshall Islands and from other islands in the region, and its barren nature, suggest that Wake Atoll may never have been permanently inhabited by the migrants from the Malay­sian-Indonesian region that settled the Marshall Islands to the south thousands of years ago. There have been no reports of artifacts from that wave of migrations. Wake was discovered by Captain William Wake of the British schooner Prince Wil­liam Henry in 1796, although there are claims that it was vis­ited by Europeans as early as 1568. The position of Wake was determined in December 1841 by Charles Wilkes, leader of a U.S. exploring expedition. The two smaller of the three islets on Wake Atoll were named in honor of Wilkes and the artist Titian Peale on the same cruise by A. Wetmore of the USS Tanager expedition in July 1923. The U.S. flag was raised on Wake in 1898 by General F.V. Green from the SS China and again by General Merritt from the U.S. Army Transport Thomas.

The United States formally annexed Wake under Presi­dent William McKinley on 17 January 1899 in a ceremony on Wake conducted by Commander E.D. Taussig of the USS Bennington. The 1923 Tanager expedition mapped Wake Atoll and cataloged its biota. The U.S. Navy took over jurisdiction of Wake in 1935 by Executive Order. Pan American Airways constructed an airport during that same year. President F.D. Roosevelt made Wake a National Defense area in Febru­ary 1941, and it was a naval and air base from 1939 to 1941. Wake was occupied by Japanese forces during World War II after the bombing of Pearl Harbor. Wake was then transferred back to the United States in surrender documents and reoc­cupied by the United States in September 1945. President J.F. Kennedy, by Executive Order No. 11048 on 5 September 1962, made the Secretary of the Interior responsible for the civil administration of the atoll. The order vested in the Sec­retary all executive and legislative authority necessary for that administration and all judicial authority other than the author­ity of the U.S. District Court for the District of Hawaiʻi. The Congress later extended the jurisdiction of the U.S. District Court for the District of Hawaiʻi to all civil and criminal cases arising on or within Wake Atoll. Since 1 October 1994, the Ballistic Missile Defense Organization (within the Office of the Secretary of Defense) has funded administration on Wake, which the U.S. Army Space and Strategic Defense Command carries out under a use permit. The atoll has approximately 200 inhabitants, all contract personnel.

Wake Atoll is about 3,714 kilometers west of Honolulu and 2,426 kilometers northeast of Guam. Wake Atoll measures about 7.8 by 3.3 kilometers and consists of three islets, Wake, Peale, and Wilkes, leaving only the northwest rim without continuously emergent land. Causeways connect these three islets. The highest and average elevations are 6.4 and 3.7 meters above sea level, respectively. Each of the three islets has a point that is near the maximum elevation. Beaches along most of the coast of the three islets are very wide, averaging about 90 meters. The shallow lagoon has a maximum depth of about 4.5 meters and is completely enclosed by the atoll reef rim except for a single artificial channel on the southwest side that separates Wilkes and Wake islets. The lagoon is gener­ally less than 1 meter deep in its southeast quadrant, where most development is located. No drilling or seismic studies, to our knowledge, have been attempted on Wake to establish the thickness of the coral cap resting on the underlying Creta­ceous-age volcanic structure, the nature of the contact between the two, nor the possible presence at depth of any mineral resource.

Many large to small seamounts formed along the South­ern Wake seamount hot-spot trail from 120 to 97 million years ago (Cretaceous). Some of those volcanoes showed volcanic rejuvenation later in the Cretaceous, about 90 to 85 million years ago. Seamounts within the Wake Atoll EEZ, including the edifice on which Wake Atoll sits, likely fall within that age range, although only one seamount in the EEZ has been dated. A sediment-covered abyssal plain ranging in water depth from about 5,200 to 5,800 meters surrounds these seamounts.